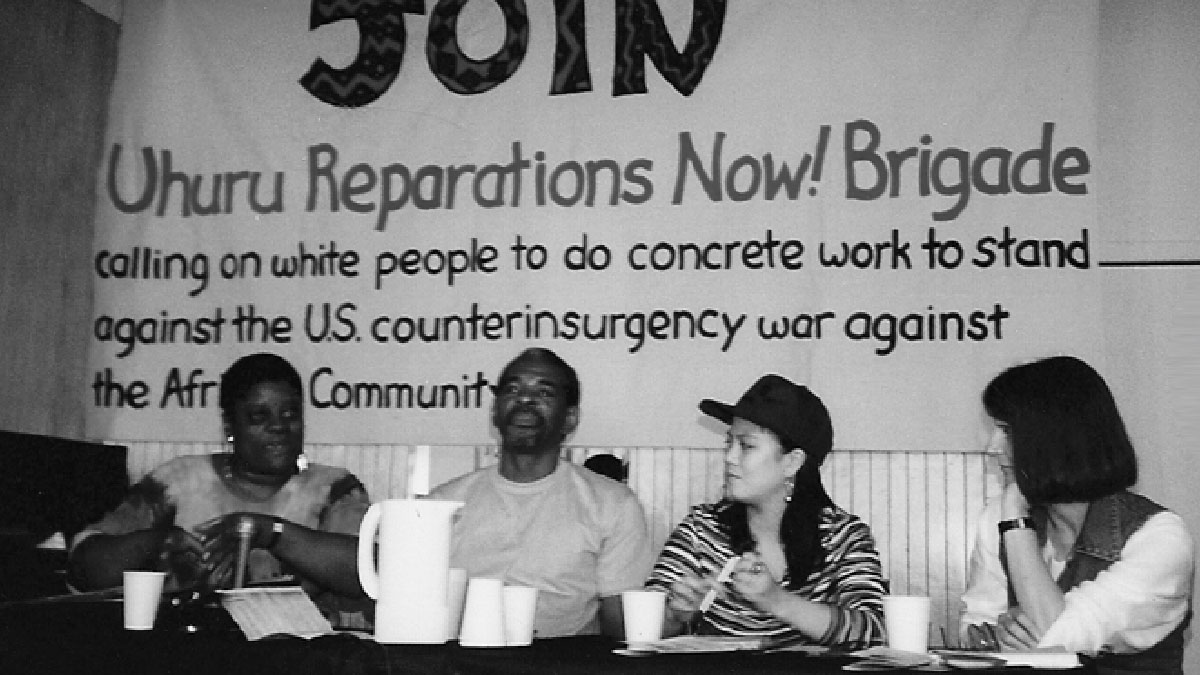 Chairman Omali Yeshitela speaks with panel at APSC event in the 1990s to build the "Uhuru Reparations Now! Brigade." This Brigade was the early stage of what is now called the Uhuru Solidarity Movement (USM). USM is the mass organization of white people who organize in the white community for reparations to African people. The work of USM is held accountable to the leadership of the APSP

Chairman Omali Yeshitela wrote of colonialism and the need for the African People’s Socialist Party: “Colonialism is a vicious beast whose existence makes ours necessary despite its temporary capacity to inflict brutal consequences.”

The colonial army trained their red laser sightings at the Chairman’s chest as he came down the stairs that morning; they shot flash bang devices into the buildings and homes, broke windows and used high-powered battering rams to break down doors.

The raid was justified by a bogus federal indictment of a Russian citizen, in Russia and not likely to travel to the U.S. any time soon. The indictment names four “unindicted co-conspirators,” including the Chairman.

We are clear that the Chairman is the target of this assault by the colonial State because he has led an uncompromising life-long fight for the total liberation of Africa and African people wherever they have been forcibly dispersed around the world.

The Chairman has done everything within his power to make it possible for the African Revolution and African workers everywhere to win their freedom once and for all.

He built a disciplined, steeled party organization fueled by relentless motion and campaigns in the interests of the African working class.

He established institutions of dual and contending African workers’ power and crafted a political ideology based on science that empowers African and colonized peoples to struggle against colonialism.

From the very beginning of his political life, more than 50 years ago, Chairman Omali defined the struggle of African people as one against colonialism–showing scientifically that Europe was poor and backwards under feudalism, amassing wealth and power through the invasion of Africa, the kidnapping, enslavement and stolen labor of African people, the genocide of Indigenous people, and the colonial occupation of the majority of the world.

This is what the Chairman calls the colonial mode of production.

As he has said, there would be no America or Europe as we know it today, without this parasitic reality and few white people would be prosperous and free.

Regardless of status or income, all white people sit on this pedestal and most of us have participated in colonial violence or sat by while it was happening.

The ground beneath our feet is soaked in the blood of African and Indigenous peoples.

Everything we have, our access to resources, democracy and “freedom of speech,” even the ideas and aspirations in our heads come at the expense of others.

This is why the APSP had to create the African People’s Solidarity Committee, putting white solidarity under the leadership of the Party’s strategy for African liberation, extending the African Revolution behind enemy lines as a second front through black power in white face.

The recent FBI assaults puts the Chairman in the spotlight on the world stage as a courageous freedom fighter who spent the majority of his 81 years of life relentlessly advancing the struggle for total liberation of African people.

Chairman Omali Yeshitela carries on a centuries-long tradition of fierce struggle for African freedom, bearing on his shoulders the work of countless leaders before him.

In response to this just struggle, the U.S. government’s colonial State has “neutralized,” assassinated, tortured, imprisoned, slandered and attacked every African leader who mobilized the African working class-fight for Africa and to exercise power and self-determination.

African revolutionary leaders here and around the world have faced the vengeance of the colonial State.

To name a few: Jean Jacques Dessalines, leader of the Haiti Revolution, assassinated in 1806 by forces backed by then-U.S. president Thomas Jefferson.

Nat Turner, hanged in 1831 after leading a courageous African uprising in Virginia.

Marcus Garvey in the 1920s who was attacked by the FBI, falsely imprisoned and deported for leading a movement of 11 million African people worldwide.

Patrice Lumumba, first president of independent Congo, assassinated by the CIA after stating that the resources of Congo would go to the people of Congo and not the colonizers.

Malcolm X and Martin Luther King, brutally assassinated in the 1960s by the FBI COINTELPRO program created to crush the Black Revolution of the 1960s and “prevent the rise of a black messiah.”

The revolution lives on in the eyes of the majority of the colonized, oppressed and working people on the planet. These fighters for African liberation are their models and inspiration.

They are the good, struggling and dying for justice, to end all poverty, human-imposed suffering, ignorance and oppression, and for the elevation of the colonized workers to the status of the true ruling class.

The U.S. and European governments, on the other side, are nothing more than death-dealing, blood-thirsty thugs living in luxury from the theft, torture, war, violence, rape and plunder of others. They are the real criminals!

Therefore I am profoundly humbled and honored to be named by the U.S. government and FBI as one of the “unindicted co-conspirators” in this case, joining Chairman Omali Yeshitela, Party AgitProp Director Akilé Anai and Uhuru Solidarity Movement Chair Jesse Nevel.

If this hideous colonial state built on rape and genocide makes it a “crime” for an African person to fight for liberation, justice, human dignity and self-government and power for African people and the oppressed of the Earth and for a white person to spend their lives fighting for reparations to African people, then put me on the side of Chairman Omali Yeshitela, the forward side of history.

The Party is winning!

Hands Off Uhuru! Hands Off Africa!