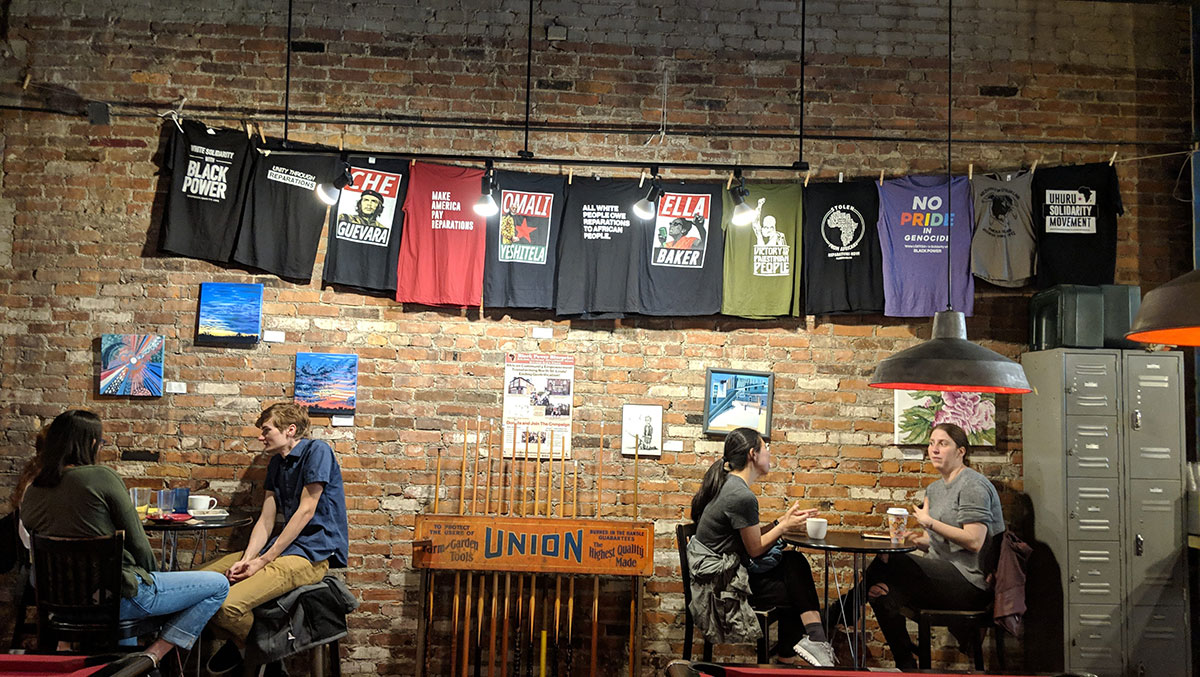 This article is republished with permission from The Burning Spear newspaper

If you are a white person who agrees that “all white people owe reparations” to African people, then Uhuru Planet Reparations Apparel is the place for you to shop.

With millions of white people mobilized to stand in solidarity with the fierce African resistance following the May 25 brutal police murder of George Floyd, Uhuru Planet has items that fight “colonialism, not racism” and declare that we must “Make Wall Street Pay Reparations!”

Our brand includes t-shirts with slogans of solidarity as well as printed tote bags, beautifully hand-crafted journals made by Wendy Craig, along with pins, berets, memorabilia from the Soviet Union and much more.

Uhuru Planet recently moved into our own production studio within the 42,000-square-foot Artisan’s Asylum makerspace in Somerville, MA.

This is a vibrant community of over 500 artists, engineers, welders and makers with a shared desire to make all kinds of things.

The Uhuru Planet office is right by the screenprint studio, which we use to print shirts and other items, using techniques including heat press, heat transfers and a vinyl cutter machine.

We have been warmly welcomed by the community and look forward to networking with other talented artists.

In our studio we have begun to hold facebook live sale events to sell our products and will continue doing these events on a bi-weekly basis. Visit our website uhuruplanet.com to sign up for text notifications of the next time we go live.

Last year Uhuru Planet coordinated a 2-month gallery exhibit and pop-up storefront at the local Diesel Cafe in Davis Sq, Somerville MA which featured a multiroom exhibit of historical photos and posters of the Uhuru Movement and the African People’s Socialist Party over its more than 40 years of political action. The exhibit also featured artwork for sale from the Uhuru Solidarity Movement’s “Art For Reparations” project—white artists in solidarity with Black Power—to raise resources for the Black Power Blueprint.

When entering the cafe, you were greeted with a full pop-up display of t-shirts and literature from Uhuru Planet, including a distribution point for the Burning Spear Newspaper.

The exhibit ran from September 8th to November 10th, 2019 and was across the street from where the Uhuru Solidarity Movement Boston branch held it’s Day of Reparations to African People tour, bringing Chairman Omali Yeshitela to speak at the Somerville Theater in October 2019.

Our mandate from the African People’s Socialist Party is to be the face of black power in white face, to win other white people to “turn loose our whiteness,” to stand in genuine solidarity with African liberation and pay reparations to African people.

All of APSC’s work is about raising reparations to African people based on the fact that our every dream and aspiration, social wealth and opportunity come from our place on the pedestal of the enslavement and exploitation of African people.

We have the value of their centuries of stolen labor and are sitting on the stolen land of the Indigenous people.

In short: everything we as white people have is stolen, and we are building a movement to return it to the African Revolution.

Uhuru Planet is a tool to win the “war of ideas,” and also raises resources for the work of the African People’s Solidarity Committee itself to be able to have solidarity centers and pay other expenses to better build our work to win reparations for the African Revolution.

As a part of Black Star Industries, Uhuru Planet is led by the Office of Deputy Chair Ona Zené Yeshitela who provides leadership and installs professionalism for all its more than 50 economic institutions of the African People’s Socialist Party.

Uhuru Planet is honored to be part of Black Star Industries and to meet alongside the African National Women’s Organization’s Decolonaise hair and body product institution and the International People’s Democratic Uhuru Movement’s Uzi, A Thread of Freedom clothing institution.

To see and purchase Uhuru Planet shirts and apparel go to uhuruplanet.com. You can also join the Uhuru Planet committee, volunteer or purchase wholesale shirts to sell. Get involved by contacting info@uhuruplanet. com or call 781-214-8131. Extending the Vanguard onto imperialism’s pedestal