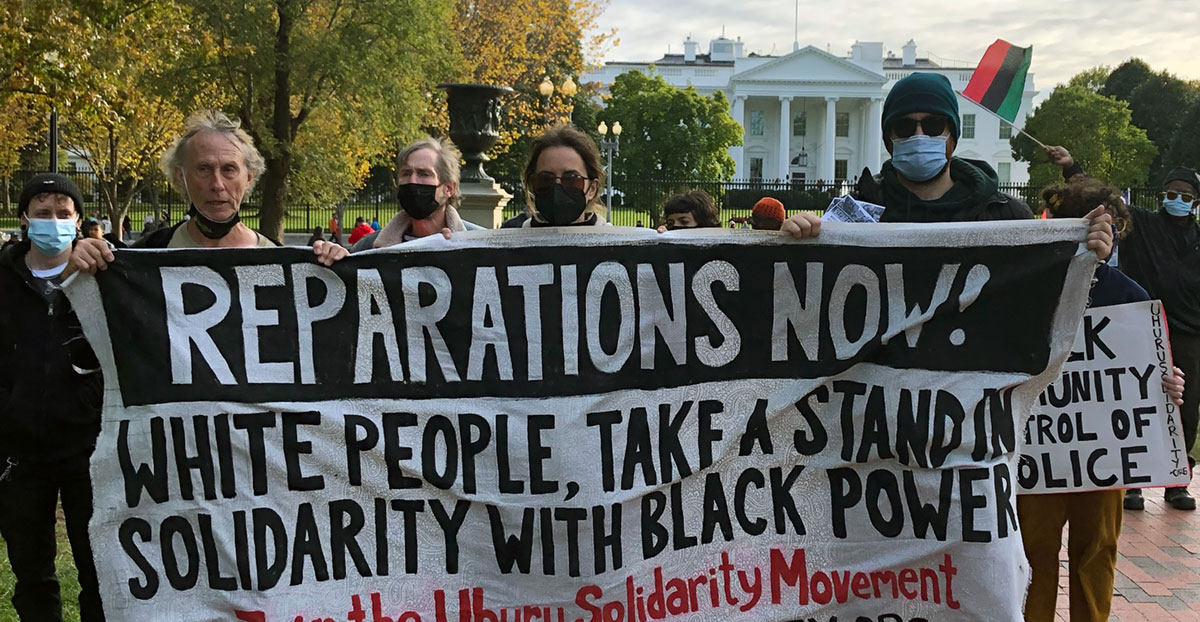 Editor’s Note: The following is excerpted from a presentation delivered by African People’s Solidarity Committee Chairwoman Penny Hess at the Black is Back Coalition’s annual Black People’s March on the White House held November 7, 2021.

And one of those problems was the question of what to do with the white people.

That has been a powerful response and responsibility that we call on all white people to join and recognize.

Our future is under the leadership of the African Revolution.

The Chairman taught us that the struggle of African people, as he has clearly shown, is a struggle against colonialism.

He did not give a damn about racism-about the ideas in white people’s heads.

He showed scientifically that a struggle against racism keeps the system going. It keeps white people in the center.

What difference does it make for us as white people to spend $600 on an unlearning racism class and go back to our neighborhoods which sit on the backs of African people and nothing has changed in the African community?

The Chairman taught us that the reason that white people have power, social wealth, prosperity, jobs, do not face police violence is because this entire system of capitalism and white people everywhere are the result of Europe’s assault on Africa. The theft of African human beings and turning them into commodities for sale.

We must pay reparations to the African Nation

Colonialism means that a people is dominated by a foreign and alien other population backed up by State power for profit. That is what goes on right here in the U.S. and all around the world.

The Chairman has taught us that the revolutionary demand for white people is reparations to African people.

Everything we have, even our understandings of who we are, what we think about good and evil, what’s beautiful and not, what’s serious and not, is based on this colonial reality that everything is stolen.

There’s nothing that we can claim that is ours, it must go back.

And that is the true revolutionary stand for white people.

There’s not gonna be a white revolution, and if there is, be very afraid.

If you are white and you are disgusted with this system, if you don’t want to see injustice, police murders that we heard about right here in D.C. and throughout the U.S., if you want to see an end to the destruction of the environment or any other form of oppression, the leadership to end this system built on slavery and genocide of the African working class, that is fighting for the liberation of African people around the world, all colonized and oppressed peoples and we have a place inside the belly of the beast, under the leadership of the African Revolution.

Solidarity with Afghan people’s right to self-determination: down with U.S. imperialism!