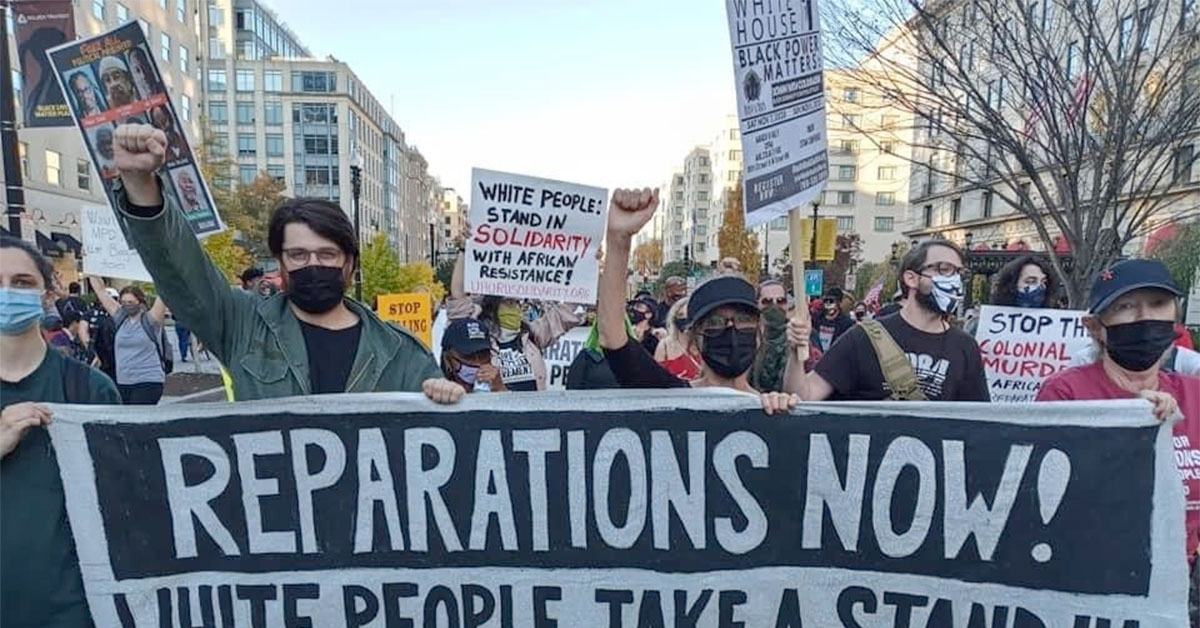 The Black is Back Coalition for Social Justice, Peace and Reparations is holding its 13th annual march on the white house and conference on Saturday and Sunday November 6 and 7, 2021 in Washington, DC.

The theme of this year’s march is, “Deepening the Resistance to Police Terror: Honoring our Political Prisoners and Prisoners of War – Black Community Control of the Police!”

Every white person who stands against U.S. wars around the world and U.S. colonial violence and oppression against African and Indigenous people inside this country must be there.

Founded and led by Omali Yeshitela, the Chairman of the African People’s Socialist Party, the Black is Back Coalition was formed in 2009 in response to the election of the neocolonial president Barack Hussein Obama.

The BIBC held its first march on the Obama white house in November of that year with the slogan, “Stop U.S. Occupation and War Inside the U.S. and Abroad.”

Over the years, the coalition has always been on the front lines of the African struggle against the colonial domination inside the US and around the world.

In 2009 most of the white left was in a frenzy of opportunist unity with the Obama presidency which forwarded a colonial agenda that rejected reparations to the black community, intensified drone strikes against the people of the Middle East, as well as deepened the poverty, police violence and mass imprisonment facing African people in the U.S. and around the world.

The formation of the BIBC, on the other hand, included a broad sector of the African population in this country who felt compelled to take the first public stand in opposition to Obama’s war agenda both internationally and domestically.

As the BIBC announced in their founding press conference, the the coalition included, “nationalists, socialists, revolutionaries, civil libertarians, cultural workers, radio personalities, community activists, political prisoners, students, civil rights veterans and an assortment of others who are determined to shatter the silence and the assumption of universal support for U.S. imperialism within our community because white power is now represented to the world in black face.”

The coalition laid out in 2009, “As our name infers, we recognize that the call for peace is empty of meaning if it is not accompanied by a demand for social justice. Therefore, our coalition not only addresses the question of peace, but we endorse the principle of resistance to imperialist aggression and occupation and announce our support for such resistance.”

BIBC has consistently upheld African community solidarity with the targets of US colonial war: Palestinian people and the people of the Middle East, including Iran, Iraq, Afghanistan, Syria that are constantly under the violence and bombs of U.S. occupation and war.

As its name shows, the BIBC has demanded reparations to African people, something Obama denounced early in his campaign.

Over the years, the BIBC has held marches in solidarity with African people of Haiti subsequent to the earthquake of 2010, made the demand for Black community control of the police, held a People’s Grand Jury on the guilt of the killer cop Darren Wilson following his murder of Mike Brown and the subsequent African working class uprisings in Ferguson in 2014.

Black is Back has raised up the call for the white left to support African prisoners of war, some of whom have been locked up for more than a half century since the U.S. government’s defeat of the African Revolution of the 1960s.

This year’s call for the march states that  this year’s actions are “part of the continuous work to destroy the colonial stranglehold the U.S. has on African people.

“This is a call for you to join in this escalating struggle of the oppressed to overturn the colonial-capitalist system that thrust itself into existence 600 years ago with the 1415 Portuguese initiation of the European trade in black bodies that were colonized in Africa and dispersed throughout the world.

“The colonial enslavement of our people was the bridge between European feudalism and capitalism that wreaks havoc on the happiness, lives and resources of all the peoples of the world.

“Colonialism is a mode of production that changed the world. It made Europe wealthy, the rest of us impoverished and gave birth to the existing world economy and the system of capitalism.

“Indeed, the existing political and economic configuration of the world is maintained globally by structures that facilitate the parasitic attachment through which colonial-capitalism loots and starves Africa, Africans and the world that functions as its host…”

It’s time that white activists begin to recognize the reality that the African working class is the true working class-proletariat in the world and as a colonized force leads the worldwide revolution against U.S. imperialism.

As white people sitting on the capitalist-colonial pedestal on the backs of African and oppressed peoples we benefit from the colonial mode of production that “made Europe wealthy and the rest of the world impoverished.”

We must be organized under the leadership of the African working class if we are serious about ending once and for all this brutal, oppressive system built on enslavement, genocide, rape and plunder.

Only the African working class has the ability to lead a truly anti-imperialist revolution and usher in a new socialist system without oppressors and the oppressed, colonizers and the colonized.

We have a strategic role to build the movement for white reparations to African people and end our self-imposed isolation from the rest of the world.

March November 6, participate in the conference on November 7. Register at blackisbackcoalition.org.

All out for the November 5 Black is Back Coalition March on the White House!