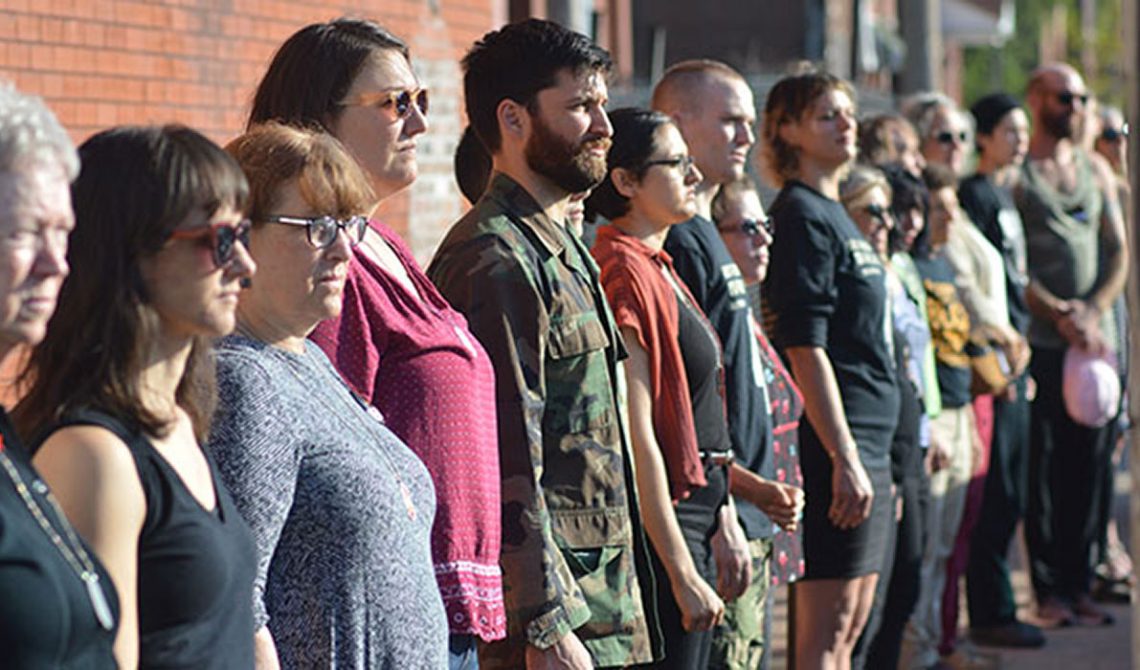 As white people, we are used to seeing the world in unity with our ruling class.

We take our aspirations and opportunities for living a prosperous life surrounded by social wealth for granted.

We impose our point of view onto the rest of the world backed up by drones, missiles and bombs!

Our pursuit of happiness is dependent on their suffering, emiseration and oppression.

We are the colonizer nation whose lives are situated on the pedestal of oppression of African people and the colonized of the Earth.

We define the world and analyze its events through the eyes of the victors, the colonizers, the “subjects” of history.

For us, everyone else is a nameless object of history.

Today, life on the pedestal of slavery, genocide and colonialism is being challenged by the resistance of oppressed peoples fighting to be free and self-governing.

This resistance is resulting in what Chairman Omali Yeshitela has defined as the “crisis of imperialism.”

As a part of this resistance the narrative of the oppressed is being forced to the surface.

This is why more and more white people are beginning to glimpse the reality and struggles of the African working class here and around the world, the impoverished Indigenous peasant or the oppressed masses in the war-torn lands of the Middle East.

This is why more and more white people are beginning to recognize that the voice of Omali Yeshitela, Chairman of the African People’s Socialist Party (APSP) and the political theory of African Internationalism speaks to us too, informs us on how the world got to be the way it is and what it takes to actually change it.

For the past two months Chairman Yeshitela has devoted his popular #OmaliTaughtMe political education session to a brilliant study of Dialectical Materialism.

Chairman Omali’s studies have been held nearly every Sunday morning at 8 am eastern time from The Burning Spear TV YouTube page for several years now.

African Internationalism is the political theory, developed by the Chairman using the philosophical tool of Dialectical Materialism that guides the African working class philosophy of the African People’s Socialist Party.

African Internationalism is a scientific approach to analyzing the world as it really is, not as we wish it to be.

African Internationalism invests all who embrace it with a sense of confidence and the feeling that we just got a whole lot smarter!

The Chairman astutely shows us why all over the world white people are prosperous and powerful while African and colonized people are struggling to barely survive in powerlessness and oppression, generally on rich land being plundered for the benefit of Europeans and North Americans.

What is Dialectical Materialism?

Dialectics is the study that brings the same scientific approach to society as is used in natural science, showing society’s interconnections and its process of change and transformation.

Dialectical Materialism teaches that everything is knowable and possible to change by applying the correct methods of struggle to overcome contradictions inherent in the course of history.

Chairman Omali teaches that all philosophy is class philosophy.

The dominant philosophy under capitalism is the philosophy of the imperialist white ruling class, that fosters the false ideas of individualism, subjectivism and the lies that the colonial domination of African people by the white colonizers is unchangeable.

Dialectics is the opposite of metaphysics, superstition and religion which gives a static view of life and the world in which nothing changes except at the hand of a higher power.

Dialectical Materialism shows that everything is coming into being and dying awaylike life itself.

This includes the social system built on the enslavement and imposed misery of billions of Africans and other peoples.

Materialism refers to the fact that matter is primary the opposite of idealism. For example, as Marx once wrote, our “brains are matter that think.”

Marx, Engels, Lenin and Stalin believed that the world revolution against capitalism and for socialism would be led by white workers in the European imperialist centers.

Chairman Omali Yeshitela exposes the fact that all white people including white workers sit on the pedestal that is the foundation of the capitalist system built on the assault, plunder, rape and pillage of African and oppressed and colonized people.

As the Chairman has proven, capitalism was built through Europe’s assault on Africa and the turning of African people into commodities for sale as human machines; the genocide and theft of the land of the Indigenous people of what is now called the Americas and the Caribbean; and the colonization of the majority of humanity.

As a consequence, white workers have only engaged in struggle for white rights on the pedestal as a struggle for power with their own ruling class for a greater share of the colonial loot, something Chairman Omali has called the “material basis of white opportunism.”

Chairman Omali shows us that the struggle of African people is not against racism, the thoughts in white people’s heads.

African people are struggling against colonialism, the occupation of a whole people by the white colonizer nation for economic benefit. The oppression of African people is enforced by the U.S. colonial State power that has the backing of the majority of the white population.

The goal of the APSP is to unite all black people as one African people wherever they have been forcibly dispersed throughout the world with the aim of liberating Africa, dismantling its imperialist-imposed borders and destroying parasitic capitalism and all its colonial minions once and for all.

As part of this strategy the Party formed the African People’s Solidarity Committee (APSC), with the mission to extend the African Revolution into the colonizer population through an organization of white people under the Party’s leadership and fighting for reparations as a revolutionary demand!

White people now have the incredible opportunity to end our self-imposed isolation from African people and the rest of the world, to make our self-criticism for our violence inflicted on African and other peoples and our self-serving unity with our own ruling class.

Through revolutionary reparations we can return the stolen wealth that has fed and enriched us for the past 600 years by joining the Uhuru Solidarity Movement (USM), under the leadership of the APSP.

This is a call to all white people to study Chairman Omali Yeshitela’s series on Dialectical Materialism.

Open up to a future without oppressors and the oppressed being built before our very eyes if only we can see it!

Chairman Omali Yeshitela’s series on Dialectical Materialism can be seen on The Burning Spear TV channel on YouTube.

For more information on the Uhuru Solidarity Movement see uhurusolidarity.org.