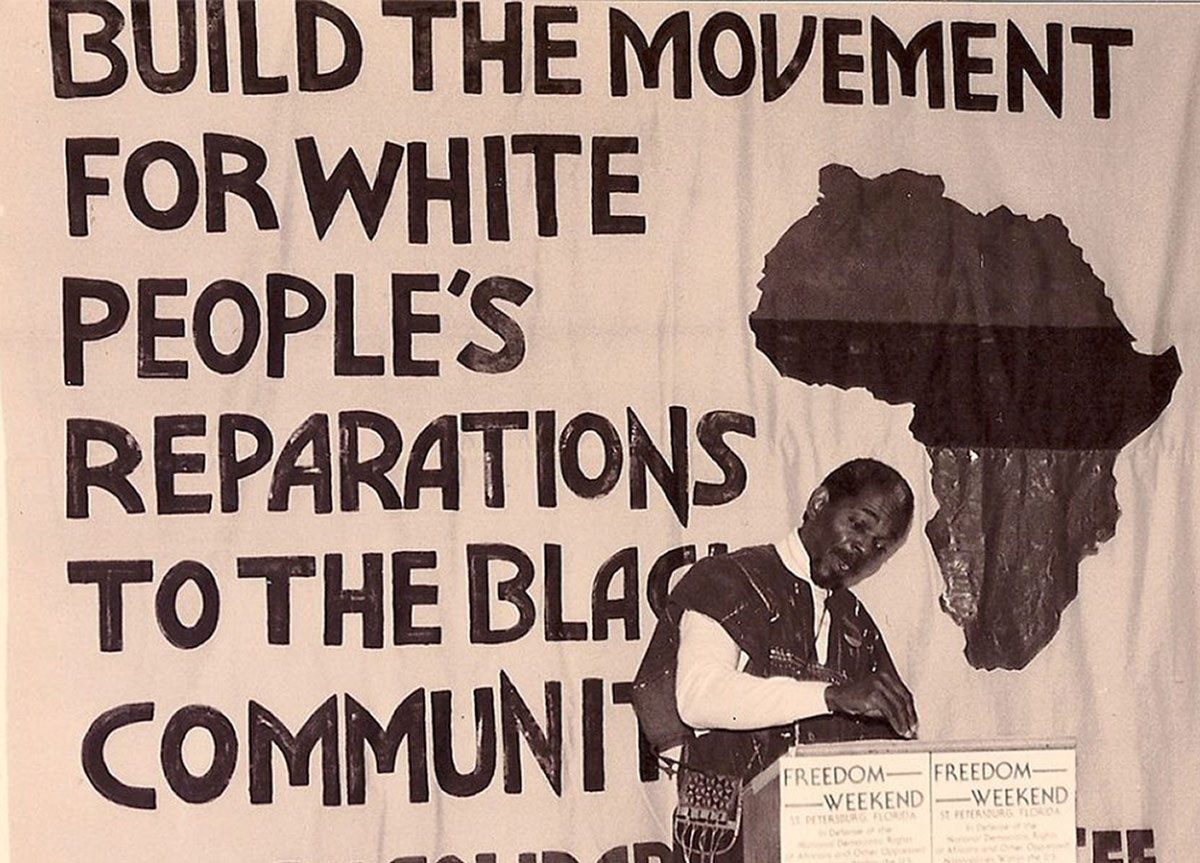 Chairman Omali Yeshitela’s work to “make reparations a household word” was a bold and revolutionary act.

The Chairman’s strategy has forced the reparations question into the mainstream discussion.

More than forty years ago, Uhuru Movement founder and leader Chairman Omali Yeshitela made the explosive statement that reparations is more than simply a payout from the U.S. government; it is a function of the revolutionary struggle of African people to reclaim control over their resources and achieve self-determination and political-economic power over their lives.

Chairman Omali Yeshitela’s goal for the African People’s Socialist Party was to take reparations out of the classrooms and courtrooms and reclaim it as a demand of the African masses – a revolutionary demand.

The Party held the first World Tribunal on reparations in 1982 in Brooklyn, NY to indict the U.S. government for its genocide against African people. The tribunal calculated that $4.1 trillion were owed to African people, the equivalent of $14 trillion today.

The Party’s World Tribunal used international law, such as the UN’s human rights charter, on behalf of the colonized, oppressed African population to expose that African people inside the U.S. are a colonized population living under the foreign, hostile domination of the U.S. government

As the People’s Advocate at the Tribunal, the Chairman explained that the verdicts of the tribunal were legitimate but African people do not yet have the State power to enforce them. Winning State power is the task of the African People’s Socialist Party.

As Chairman Omali Yeshitela has proven, the entire economy of capitalism is based on the assault on Africa, the enslavement of African people and colonialism around the world.

Reparations are owed for more than the period of chattel slavery in the U.S., but for the ongoing oppression of African people that forms the foundation of the social wealth and opportunity available to all strata of the white population.

As the Chairman has written, “Every white aspiration and dream, every expectation for happiness and a good life—from a successful marriage to a secure future for their children—requires drone strikes in Pakistan, police murders and mass imprisonment in African colonies and barrios of the U.S., and starvation and forced displacement of the oppressed throughout the world.”

The Party’s founding of the African People’s Solidarity Committee in 1976, opened a new front of the African Revolution “behind enemy lines,” as the Chairman says, by recruiting members of the white oppressor nation population to work under the Party’s leadership, going back into our own white communities to build the movement for reparations.

Material solidarity, rather than empty gestures, was required.

Our responsibility is to raise resources for the work of the Party as a concrete expression of our commitment to reparations.

This is how we can begin to right the historic wrongs of slavery, genocide and colonialism that built our lives at the expense of Africans, Indigenous and other colonized peoples.

Chairman Omali Yeshitela’s theory of African Internationalism has proven that the struggle is not against racism, the ideas in the minds of white people.

African people are a colonized nation dispersed around the world, fighting for power in the hands of the African working class.

In this period as the demand for reparations is gripping the masses of African people and becoming a material force, some white opportunists are latching themselves to the reparations issue to build their careers and serve the reformist agenda of liberal imperialism.

A spate of white-led, faux-solidarity organizations have been formed that proclaim to raise money “for reparations” despite having no accountability or relationship to the African Revolution whatsoever.

One such organization even attempts to redefine reparations as a patriotic endeavor intended to preserve the “soul” of the U.S.

Nothing could be further from the goals of the African People’s Socialist Party and the struggle for real, revolutionary reparations!

Indeed, Chairman has made clear that “U.S. imperialism cannot survive a successful struggle for reparations.”

It is more urgent than ever that the African People’s Solidarity Committee and our mass organization, the Uhuru Solidarity Movement, recruit the masses of white people to unite with the Chairman’s call for a stand of genuine reparations under the leadership of the African working class, as opposed to the new political fad of reparations-racketeering by white left and liberal fraudsters.

APSC and USM represent the legitimate stand of reparations for white people because we are a constituent organization of the Party and a component of its strategy to win African liberation and unification.

The Chairman wrote in the call to the 2020 APSP plenary:

“Since our Seventh Congress there has been an exponential leap in the growth of the anti-colonial solidarity movement under the Party’s leadership. The Uhuru Solidarity Movement exists in more than 130 cities and 30 states within current U.S. borders. USM is spreading and winning the demand for reparations and fracturing the reactionary solidarity of a politically backward, parasitic colonial population.”

It’s time for the Reparations Uprising!

We must join the fight to bring reparations to its ultimate conclusion: freedom and self-determination for the African community, the precondition for the advent of genuine socialism, where no one lives at the expense of another.

The Uhuru Solidarity Movement has a critical role in this as the strategic front of the Party inside of white society!

USM must take up the Party’s call to target the moneyed sector of parasitic capitalism, including the colonial prison industry and genocidal diamond trade, to pay reparations to the African Revolution through material support of the Party’s more than 50 programs and institutions of African self-determination and economic development.

Reparations is concrete. African people’s resources, hoarded in the white world, must be turned over to the Black Power Blueprint program of the African People’s Education and Defense Fund, transforming the lives and conditions of the African working class in North St Louis and beyond.

Chair of the Uhuru Solidarity Movement