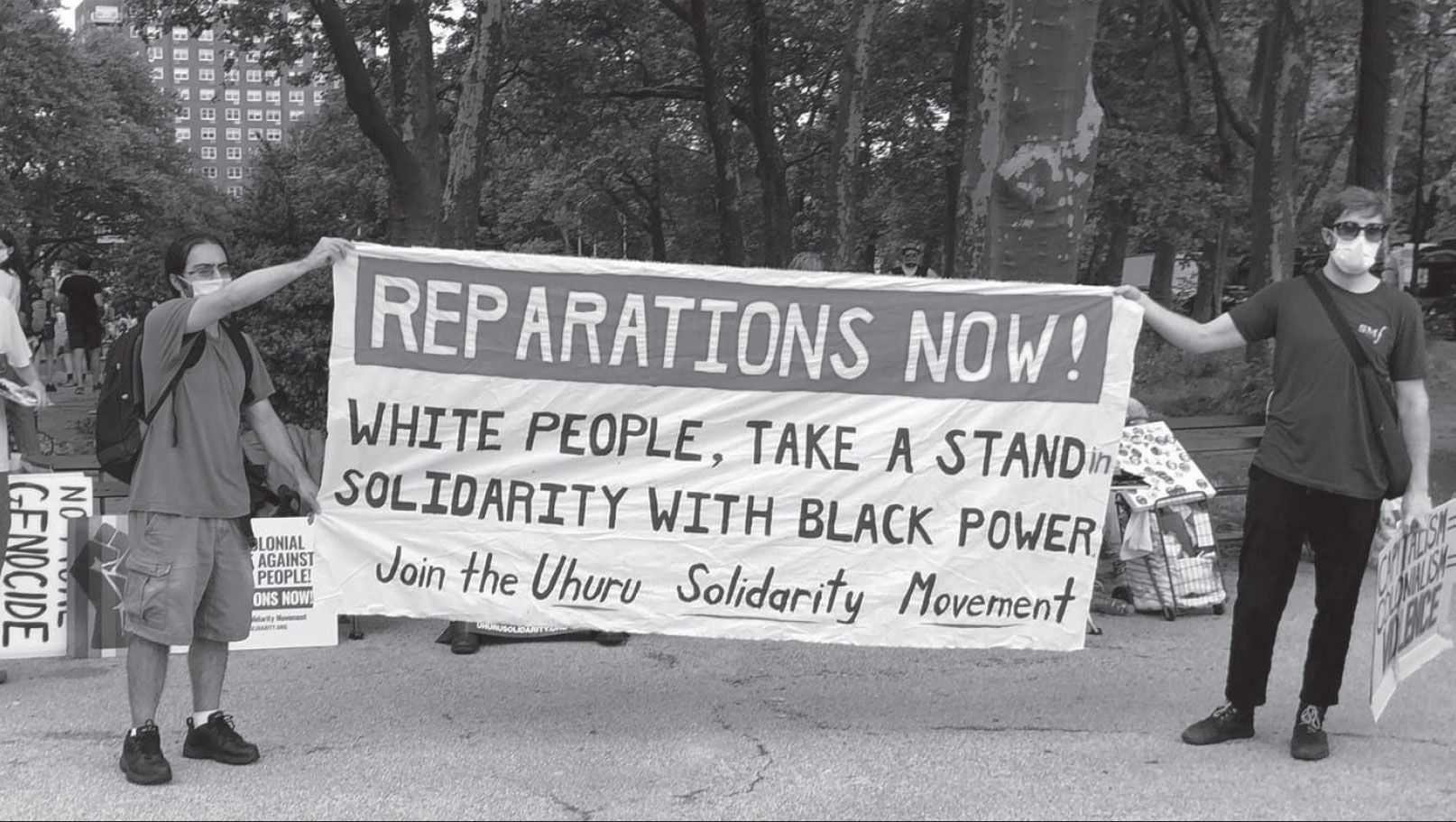 After George Floyd was brutally murdered by police in Minneapolis on May 25 the African working class erupted in a profound, sustained resistance.

That resistance has opened up the deepest questions about this society we live in and the origins of capitalism and white power itself.

It has forced the white population to look the stark reality of African life in this country squarely in the face—a reality that is quite different than ours.

It’s not just the daily threat of police violence and public policies of police containment that stalk African people of all ages.

It’s not only the discriminatory mass incarceration that fills the multi-billion dollar colonial prison industry.

There’s the poverty and ever-widening wealth gap. There are the health disparities, from the brunt of the covid-19 deaths to the shocking rates of African infant and maternal mortality.

There’s everything from the gaps in education to the right to things like jogging, shopping, birdwatching.

Some call this “racism” or even “systemic” or “institutional racism.”

But they are wrong.

African People’s Socialist Party Chairman Omali Yeshitela is a scientist of political life who has crafted the theory and strategy for making revolution and the organization to win.

For over 50 years he has led the struggle for the liberation of Africa and African people everywhere.

He has made it clear that the oppression of African people inside the U.S. is colonialism.

Colonialism is the domination of a whole people or nation by a foreign or alien state power for the economic benefit of the colonizing nation.

The colonial state is the institution of violence (the police, the military, the courts and prisons) that protects the interests of the colonizing ruling class and people.

This is why no white person has ever been prosecuted for the thousands of lynchings, burnings and murders of African people that we have committed over the years.

We are the colonizer nation, official deputies of the colonial state.

Every “Karen” or “Ken” populating social media is fighting to maintain the status of agent of the colonial state.

“Between colonizer and colonized there is room only for forced labor, intimidation, pressure, the police, taxation, theft, rape, compulsory crops, contempt, mistrust, arrogance, self-complacency, swinishness, brainless elites, degraded masses. No human contact, but relations of domination and submission which turn the colonizing man into a class-room monitor, an army sergeant, a prison guard, a slave driver, and the indigenous man into an instrument of production.”

These words of Aimé Césaire, a poet and anti-colonial politician from the French colony of Martinique, aptly describes the colonial reality inside this country.

We are the colonizers

As white people we are settler colonizers. We came from poverty in Europe to walk on the streets of gold in the United States on the backs of African and Indigenous people.

We played an active role in the theft of Indigenous land and were enthusiastic participants in popular genocidal policies to exterminate Indigenous people.

This land still belongs to the Indigenous people whether they speak Spanish, Mayan or Lakota.

At the same time African people were assaulted, occupied and colonized by Europeans on the continent of Africa.

We live in a system that turns African people into commodities and human machines, destroys their civilization and economic system, steals their resources, kidnaps and trafficks them to this stolen land because it was financially beneficial to us and now we say their problem is “racism?”

This process amassed the greatest wealth the world had ever seen, brought about the foundation of the capitalist system and turned Europe and North America into the richest, most powerful, most deadly imperialist states in history.

This is the process that creates the “gaps” in every front of life.

This is not racism. It is colonialism.

Chairman Omali called the struggle against racism a “self-defeating waste of time.”

The struggle against racism, he writes, “validates the assumption of the superiority of white people.”

The definition of racism as the problem facing African people in this country “denies Africans our national identity and dignity, rather than defining the system of our oppression.”

“African people are not a race but a nation of people forcibly dispersed around the world,” Chairman Omali asserts.

The African People’s socialist Party has never been “diverted from our mission of capturing power and uniting Africa and our nation under the leadership of the African working class.”

“Our struggle has always been for power, not against racism. To the extent that we win power, the “racism” of others becomes irrelevant,” he asserts.

As the colonizer nation whose lifestyle and worldview is a consequence of being situated on the pedestal built on the backs of African, Indigenous and colonized peoples we have work to do if we want to end our relations of domination over African people and the rest of humanity.

The African People’s Socialist Party has created our mission: Get organized under the leadership of the African working class, the African Revolution which will forever end parasitic capitalism, ushering in a new world of socialism, justice, peace and liberation.

Our job is to be the voice of black power in white face.

Win over other white people to jump off that blood-drenched colonial pedestal.

Win reparations, not as charity but as a revolutionary act returning the stolen resources to those whom it was stolen.

White people must understand the colonial mode of production