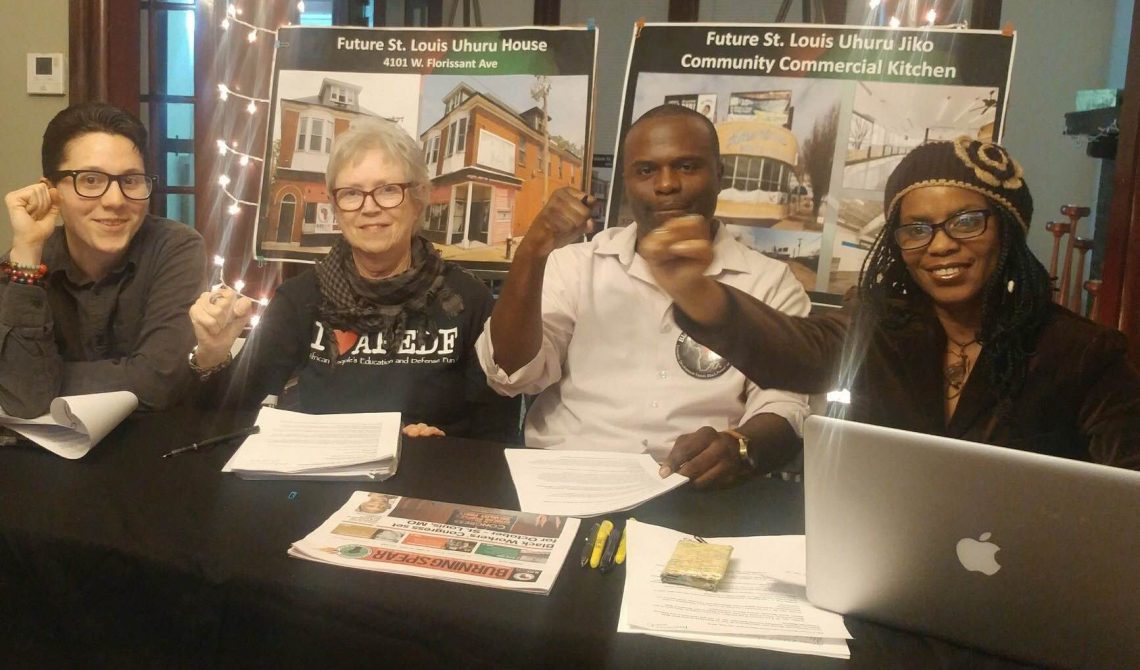 Originally published in the March 2019 issue of The Burning Spear newspaper and republished with permission.

ST. LOUIS—In 1976, Chairman Omali Yeshitela forever changed the world and the role of white people in it with the creation of the African People’s Solidarity Committee (APSC). Before capitalism there was no “white people.” It was only through attacking Africa, enslaving African people, and colonizing the rest of the world that white people created “white people.”

Since then, whiteness has been nothing but attachment to a social system that requires violence to survive. We isolated ourselves in wealth, at the expense of a genuine relationship with the rest of the world. Since the European assault on Africa, African people have been resisting and struggling to regain their resources and self-determination.

In 1976, the African People’s Socialist Party (APSP) solved the question of what to do with the white people. They realized that the relationship of white people to the black struggle had to be accountable, made concrete through revolutionary organization under the leadership of the Party of the African working class.

The APSC is the first time in history where white people have been organized to a genuine stance of solidarity with the struggle by the African working class to liberate and unite all of Africa and African people.

The purpose of APSC, which has been chaired by Penny Hess for over 40 years, is to function as black power in white face inside of white communities, organizing white people to pay reparations and to recognize our interest is in material solidarity with the African Revolution.

The social wealth of white people has not only come at the expense of the taking away of self-determination of whole nations of peoples, it has also caused a certain kind of misery among white people ourselves, a misery that is exploding in this era that Chairman Omali Yeshitela has defined as the crisis of imperialism: the world system built on slavery and genocide is finally ending because of the resistance of African and oppressed peoples.

If white people continue to latch on to this system, we will see the crisis as our own. One expression of this is the opioid crisis. A white leftist on my Facebook timeline shared an article called “Anti-Anxiety Medication are Killing White American Women” and wrote, “these white workers are overdosing because they are being screwed over by the same system that screws over our brothers and sisters of color.”

This explanation keeps white people in the center and lets us off the hook for our history of violence against African people.

We raped, lynched, burned and tortured African people for hundreds of years.

We stole this land from the Indigenous people at gunpoint.

We cannot do this and call ourselves “brothers and sisters.” It also does a disservice to the pain of white people because it provides no real answer for how to end the isolation that leads us to drug addiction and suicide.

African Internationalism, the philosophy of the Uhuru Movement developed by Chairman Omali, gives us the opportunity to understand our pain in the context of living on the pedestal of the genocide of African and oppressed peoples.

The Chairman has said, “All the people who want to see a new world—everybody including poor white people—must turn loose their whiteness and join with the struggle of black power to overturn white power, which is the social system within which the poverty of white people occurs.

So what white people have to do is fight against white power. They must unite with the struggles of black people whose oppression and exploitation is the basis for the existing system that is oppressive and exploitative.

The world is still split between the colonized and colonizer. This relationship can’t be overturned through “multiracial working class” (a.k.a white led) movements or dating an African or “having black friends.” The solution is joining humanity in a principled way.

Reparations is our responsibility and is in our interest

We have to pay back the stolen resources. We can find the most humbling and fulfilling reason to live in the struggle for reparations to African people. This is the principled relationship that the Party has been struggling to forge since the creation of APSC in 1976.

With African Internationalism we can finally understand all the horrific violence in the world:  the imperialists’ wars that kill millions each year, the neo-colonialists’ murderous repression to hold the power, the no clean water violence, etc.

African Internationalism also allows us to understand the serial killers, the school shootings and the human trafficking. Without a scientific explanation for this real-life horror movie, It is no wonder that we turn to drugs and suicide.

African Internationalism finally takes the scab off and proves the world system was built on genocidal white power and must be defeated as white power. Then we can see that whether we are discriminated in the white community as LGBTQ, or women, or disabled, white power is the enemy.

Joining the struggle for the victory of black power over white power through joining the African People’s Solidarity Committee or the Uhuru Solidarity Movement (USM) is the honest path for white people to fight against all forms of oppression.

The Party created the Uhuru Solidarity Movement as a mass organization of APSC that any white person can join to take a stand for reparations to African people. As stated in the USM branch building manual, “A revolutionary mass organization means that not every person who joins the organization will be willing to contribute the same level of time and resources.

A mass organization meets the people “at their political door” and gives everyone who unites with the USM Principles of Unity a way to contribute at whatever level.”

APSC, on the other hand, is a cadre organization. A cadre is a revolutionary who has committed to the highest possible stand of responsibility and accountability and made a decision to put the African revolution before anything else.

The APSP is moving forward to a liberated world, which means they want to take everyone with them—the Mexican people, the Palestinian people, the Venezuelan people—everyone.

The African People’s Socialist Party is a cadre organization, a vanguard Party comprised of professional revolutionaries, and APSC was formed for white people who want to go to the next level and become cadres of the African Revolution!

Some USM members may never join APSC but still do incredible work as USM leaders and organizers. That’s why both organizations exist! If you have not joined APSC or USM, I implore you to do so today. And if you want to be true cadre as a white person, join APSC.

Now more than ever we must recruit steeled cadre from the white oppressor nation and organize the masses of white people to a genuine stance of material solidarity with African liberation through reparations.