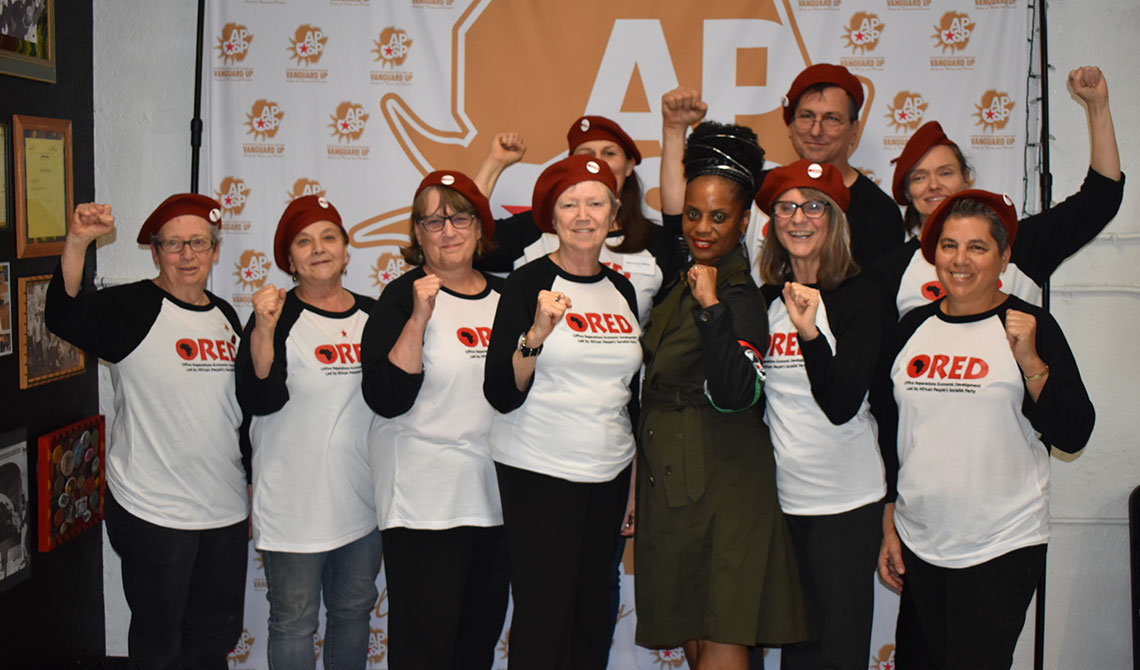 Extending the Vanguard onto imperialism’s pedestal

The Plenary was a national conference of all Party members and units in the U.S., the Caribbean, in Europe and on the continent of Africa.

The Plenary was a check up on the mandates and resolutions of the Party’s Seventh Congress held in October 2018.

The Congress is the Party’s highest body where Party members report to the organization, elect their leadership and adopt the Party’s five-year plan, laid out in Chairman Omali Yeshitela’s Political Report.

What does “Extend the Vanguard onto the Pedestal” mean?

The African People’s Solidarity Committee is the white organization formed by the African People’s Socialist Party back in 1976 to carry out the Party’s strategy to win white people inside the U.S. and around the world to stand in solidarity with the struggle for the liberation of Africa and African people.

APSC is an organization of the African Revolution strategically placed “behind enemy lines,” in the heart of white society working under the Party’s direct leadership, accountable to the Party’s Central Committee.

The Party built APSC to overturn opportunist and self-serving relationships of white people to African people based on charity or racism, which APSP Chairman Omali Yeshitela has defined as “a self-defeating waste of time.”

“What is called racism is simply the ideological foundation of capitalist imperialism. Racism is a concept that denies Africans our national identity and dignity, rather than defining the system of our oppression,” the Chairman explains in his groundbreaking book, An Uneasy Equilibrium: The African Revolution vs Parasitic Capitalism.

The conditions of African people inside the U.S. and across the world is colonialism; the military and economic occupation of an oppressed people for the benefit of the colonizers.
Chairman Omali has put forward a scientific basis for both the poverty and oppression of African people everywhere they are located and the prosperity available to white people.

Capitalism, the Chairman proves, is a parasitic system, built on Europe’s assault on Africa, turning African people into commodities for sale as enslaved machines for the production of wealth (the greatest wealth ever produced on the planet), stealing African labor, science, arts and independence!

Capitalism was created through the genocide of the Indigenous people, the theft of their land and the imperialist colonial domination of the majority of humankind.

Parasitic capitalism means there is the parasite and the host, the masses of colonized humanity being violently devoured by the tapeworm inside the U.S. and around the world.
Chairman Omali defines African people as part of the colonized “host” and we—the white people—are the colonizers, the oppressor nation.

The colonized make up the pedestal upon which capitalism rests. Without the hosts, capitalism will die.

All white people sit on this pedestal on the backs of African, Indigenous and colonized peoples everywhere!

We don’t all have the same access to the stolen resources but both the white ruling class and the white working class were born of this same parasitic assault on the world that transformed Europe from feudalism to capitalism.

This is the basis for our opportunism that has always sold out the interests of African people for our own short term goals.

The main struggle of the white left has been to fight for greater control of stolen colonized resources and power under imperialism for a greater number of white people.

The Party is the Vanguard of the African working class

The assigned task of the African People’s Solidarity Committee is to win reparations from white people directly to the programs and projects of the Party as a means of reversing the parasitic, blood-sucking flow of resources back to the African Revolution.

This way reparations becomes a revolutionary demand, the true redistribution of the wealth of the world.

This is how we white people can become true socialists, anti-imperialists, and revolutionaries because the road to socialism and the world revolution is “painted black!”

Paying reparations, standing in genuine solidarity with the African Revolution is in our interest. It allows us to turn loose our whiteness.

“Indeed,” Chairman Omali wrote in his political report to the Plenary, titled Vanguard Up! The Unity of Theory and Practice, “the absolute unity of white people with their own ruling class has been forever fractured by the existence of the African People’s Solidarity Committee.”

APSC reported to the Party Plenary

It was a great honor for APSC to be able to report to this very historic Party Plenary! In our report we saluted our leadership, Chairman Omali Yeshitela, Deputy Chair Ona Zené Yeshitela, the Party’s Central Committee as well as all the Party’s members and supporters who were in attendance.

We presented to the body the Central Committee of APSC and the National Executive Committee of our mass organization, the Uhuru Solidarity Movement (USM). We laid out the political basis for the Party’s formation of the Solidarity Committee and presented the goals of APSC for the next year.

The building and strengthening of the Party’s Regional infrastructure was mandated by the Chairman’s Political Report for all Party units and mass organizations, and for APSC as well.

Building the regions (Northern, Southern, Midwestern and Western) is therefore our main goal which includes opening solidarity centers in in the Party’s Regional Hubs, building our regional committees and opening up APSC units in new cities and towns as well as regional recruitment and implementing the Party’s N2U volunteer program.

APSC Director Kitty Reilly reported on the Office of Reparations and Economic Development (ORED), which works directly under the Office of Deputy Chair Ona Zené Yeshitela.

The Uhuru Solidarity Movement (USM) Chair Jesse Nevel reported on our mass work which has members in 130 cities and 30 states.

We laid out plans to take on the “Moneyed Sector,” as mandated for us by Chairman Omali Yeshitela.

We are launching a campaign demanding reparations from corporate CEOs, especially from sectors such as private prisons and the broader prison and tech industries, whose massive livelihoods are directly tied to the oppression of African people in this period, not just during the time of African enslavement.

The African People’s Solidarity Committee calls on white people to answer the call to become Black Power in white face inside the belly of the beast.

Take up the work of the revolutionary reparations demand. Let’s make our self-criticism to African people and the oppressed of the planet and end forever our self-imposed isolation from humanity.