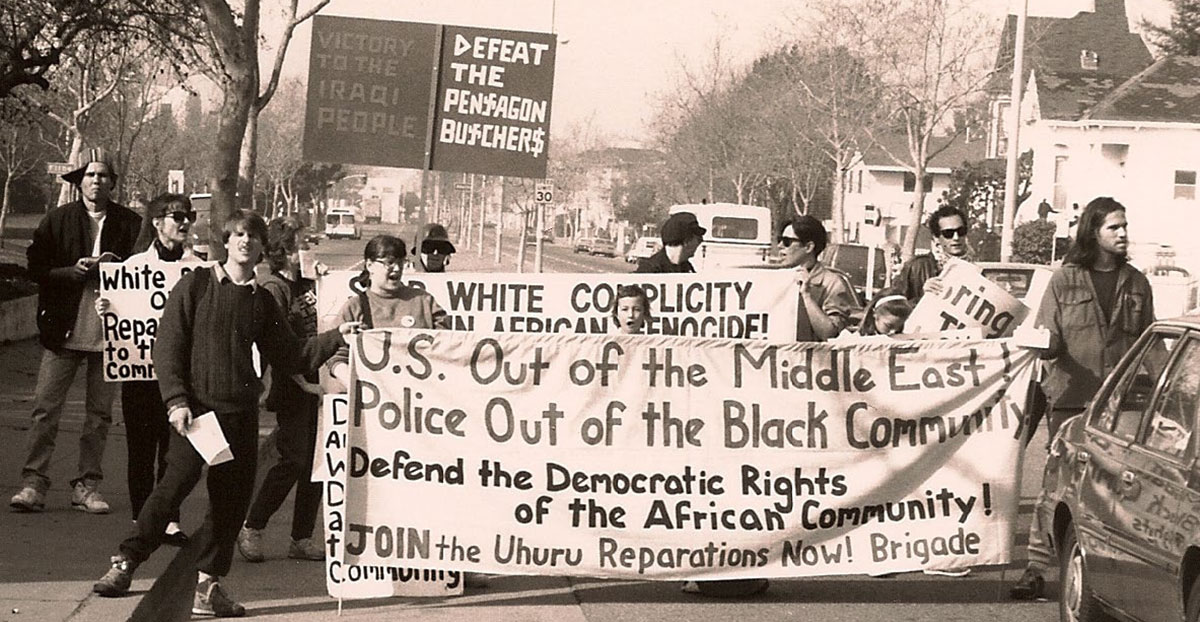 The Uhuru Solidarity Movement (USM) stands in solidarity with the people of Afghanistan, who have fought courageously for over two decades since 2001 to liberate their homeland from U.S. imperialist military occupation.

USM is the organization of white people formed and led by the African People’s Socialist Party (APSP), organizing in the white community to build the movement for reparations to African people.

We unite with the APSP’s unwavering stand for international solidarity with Afghanistan and with all colonized, occupied, oppressed and exploited people and nations worldwide who are resisting U.S. colonial-capitalist domination of their lands and resources.

As the Party has summed up, the defeat of the U.S. occupation forces in Afghanistan is a part of the deepening crisis of imperialism, which Chairman Omali Yeshitela has labeled, “the uneasy equilibrium.”

After twenty years of brutal slaughter and occupation and over two trillion dollars spent to try to crush the will of the Afghan people, the U.S. has now been forced to leave.

As Chairman Omali Yeshitela wrote, “We are experiencing the wake of a changed world. Nothing will ever be the same again in terms of the relations of power existing between the historically white imperialist Europe and the vast majority of the rest of us. China, India, Venezuela and all of South America, the turbulent Middle East, the Iranian challenge, Afghanistan, Palestine, Iraq, Egypt, Zimbabwe and Yemen, among 214 others, are among the emergent forces that contribute to the vortex of instability that defines the imperialist world.”

After the initial invasion of Afghanistan in 2001, the white “anti-war” movement was silent or openly supported the occupation. It was only the Chairman and the APSP who took a public stand of opposition to U.S. occupation of Afghanistan when the Chairman formed the Florida Alliance for Peace and Social Justice in 2001 and launched a series of major demonstrations at MacDill Air Force Base in Tampa, Florida.

As Chairman Omal Yeshitela has stated, the U.S.-backed government and army that were installed in Afghanistan in 2001 was a brutal puppet regime representing a hostile foreign power.

The people of Afghanistan have the right to self-determination and control of their own land, lives and resources!

Many in the bourgeois media are expressing outrage that the return of the Taliban represents a threat to the interests of Afghan women, but there was deafening silence from these same forces for the past twenty years as women in Afghanistan were being viciously tortured, mutilated, raped and murdered by the U.S. occupiers.

It was under the U.S. occupation regime–not the Taliban–that in 2011 an Afghan girl “died of her injuries after being raped by American soldiers stationed in Afghanistan’s southwestern province of Farah,” as reported in PressTV. The report continues:

“U.S. forces aboard five Toyota Hiace vans transferred the teenage girl along with several other Afghan women and girls to a military base in the province. They then sexually assaulted them, Afghan sources, who requested anonymity, told Iran Newspaper on Network on Wednesday.

“Two other victims were admitted to a nearby hospital and are currently receiving treatment for serious injuries they suffered following multiple rapes.”

Rape, torture and slaughter are the U.S. imposed realities under which Afghan women have been forced to suffer for the last twenty years, without a word of protest from the same pundits who now shed tears on national television.

The U.S. has no political or moral authority to accuse anyone of “human rights violations”

As Omali Yeshitela, Chairman of the APSP and theoretician of African Internationalism has explained, the U.S., Europe, and the colonial-capitalist system were birthed through the invasion of Africa and enslavement and subsequent colonization of African people for centuries, along with the genocidal mass murder of the Indigenous people and theft of their land. Slavery, colonialism and genocide comprise the “original sin” of the capitalist system and of America itself.

Chairman Omali Yeshitela wrote in the book Vanguard: Advanced Detachment of the African Revolution: “Capitalism was born in disrepute, of the rapes, massacres, occupations, genocides, colonialism and every despicable act humans are capable of inflicting.” This includes the historic European assault on the Muslim world and the carving up of the so-called Middle East with colonial borders imposed by the United Kingdom and France through the Sykes-Picot agreement in 1916.

As Chairman Omali Yeshitela explains, the struggle is not against “racism,” the ideas in the minds of white people that we use to justify the colonial relationship we have with the rest of the world’s peoples.

Since the murder of George Floyd over one year ago, police in the U.S. have murdered over 1,200 people. An African person is more than three times more likely than a white person to be shot and killed by police. This is colonialism.

We call on white people who stand against U.S. wars of occupation to unite with the anti-colonial struggle of African people inside the U.S. and around the world.

If we are truly against U.S. wars abroad, we must take a stand against the wars of occupation right here inside the colonial borders of the U.S. against the African and Indigenous communities, the fundamental war upon which the entire system of colonial-capitalism rests.

We must join the fight for reparations for the centuries of oppression and exploitation that continue to this day. This is the basis for genuine anti-imperialism.

The stand of solidarity with the African Revolution links us in unity with oppressed peoples everywhere, from Afghanistan to Venezuela.

Join the Uhuru Solidarity Movement and build the March for Reparations to African People!