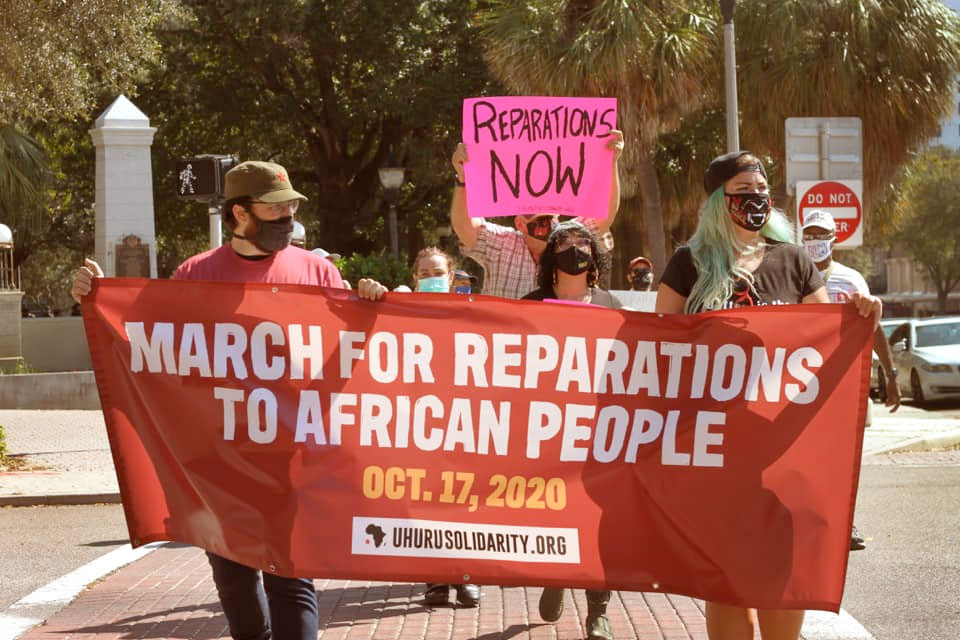 This article is republished with permission from The Burning Spear newspaper

“When the social media posts die down, will the actions and [white] people’s conviction for change die down too?” asked an African protestor quoted in The New York Times talking about the noticeable number of white people who came out in support of African-led resistance following the police murder of George Floyd on May 25.

More than the COVID-19 lockdowns, more than the unfolding drama of the presidential elections, the year 2020 is defined by the brutal police murder of George Floyd in Minneapolis and the fierce, extended African working class-led resistance.

Killer Cop Derek Chauvin, who was released on bail with impunity on Oct. 7, pressed his knee into George Floyd’s neck on May 25, violently suffocating Floyd in front of angry live streaming onlookers for nearly 9 minutes until Floyd could struggle to breathe no more.

Sparking rebellions throughout this country and the world, the African working class took the covers off the of the enslavement, genocide, violence and terror against African and Indigenous peoples that is the cornerstone on which America, Europe and capitalist prosperity rest.

Millions of white people, confronted with our own complicity and self-imposed ignorance of convenience in relation to African and colonized peoples, were compelled to come out and march in solidarity.

The exuberant African-led uprising forced large numbers of us to admit that African oppression inside the U.S. goes deeper than racism; that it is systemic and affects every aspect of their lives.

Suddenly the conditions of African people were being discussed on the pages of The New York Times and examined from TV screens by CNN pundits.

On July 3, The New York Times reported that “Four recent polls…suggest that about 15 million to 26 million people in the United States have participated in demonstrations over the death of George Floyd and others in recent weeks.

“These figures would make the recent protests the largest movement in the country’s history, according to interviews with scholars and crowd-counting experts.”

An estimated 6 to 10 percent of the entire U.S. population participated in these marches across the United States, where by early June “more than 4,700 demonstrations, or an average of 140 per day,” had taken place in big cities, small towns and even rural areas.

We must do more than protest. We owe reparations

Many of us came out because we the African working class forced us to confront the stark reality of the two Americas, that of the oppressor and the oppressed.

As he has explained for nearly 50 years, the problem facing African people inside the U.S. and around the world is colonialism, not merely racism, the ideological underpinning of the capitalist system built on slavery and genocide.

Colonialism is enforced by the colonial state bearing down on African people daily, in the form of the police, prisons and courts.

So we have to do much more than march.

We owe reparations to African people.

We owe reparations for the social, generational wealth we have access to from the stolen labor and genius of African people.

We owe reparations for the violence, lynchings, imposed poverty and mass imprisonment that we inflict, vote in or are complicit with.

We owe reparations for the luxury to simply ignore the conditions faced by African people today, including the almost daily murders of African people by the colonial police force.

We owe reparations for the fact that for 600 years African people have produced life for us at the expense of centuries of profound suffering for them.

This is why the African People’s Socialist Party is about more than protest, although it has led literally thousands of protests over the past 50 years.

The African People’s Socialist Party is building institutions for political and economic power in the hands of African people and fighting for the total liberation of Africa and return of its stolen resources into the hands of the African working class.

It is building institutions such as the Black Power Blueprint in North St. Louis.

The Party created a strategic white solidarity committee, the Uhuru Solidarity Movement, with the mandate to go into white society to win reparations for the African Revolution and genuine solidarity from white people.
Colonial violence and exploitation never stops.

The Indigenous people continue to be held in concentration camps, called reservations, on their own stolen land.

One out of every 8 persons in prison in the entire world is still an African man in the US.

Forty percent of African children still grow up in severe poverty in this country.

Therefore, the African Revolution fights every day, regardless of whether it is in the news or not.

So as the marches and actions die down, as life opens up and cameras begin to focus on other trending issues, are we going to return to life as usual on the pedestal soaked in the blood of others?

Now that we know the truth that we have been forced to see, can we go back to “normal” until the next rebellion led by the African working class jolts us out of our American dream?

Or will we make our commitment to be part of really overcoming the root basis of oppression under the leadership of the organized African working class?

Colonialism has been going on for 600 years. African workers are saying it must end now!

Join the Uhuru Solidarity Movement, under the leadership of the African People’s Socialist Party, in the fighting for the total liberation of Africa and African people everywhere.

Get organized under the leadership of the African working class, where reparations is a household word;, a way of life based on rectifying our relationship to African and oppressed people.

As a revolutionary demand reparations is part of the strategy to overturn oppression and build a world without the oppressors and the oppressed. Visit UhuruSolidarity.org.