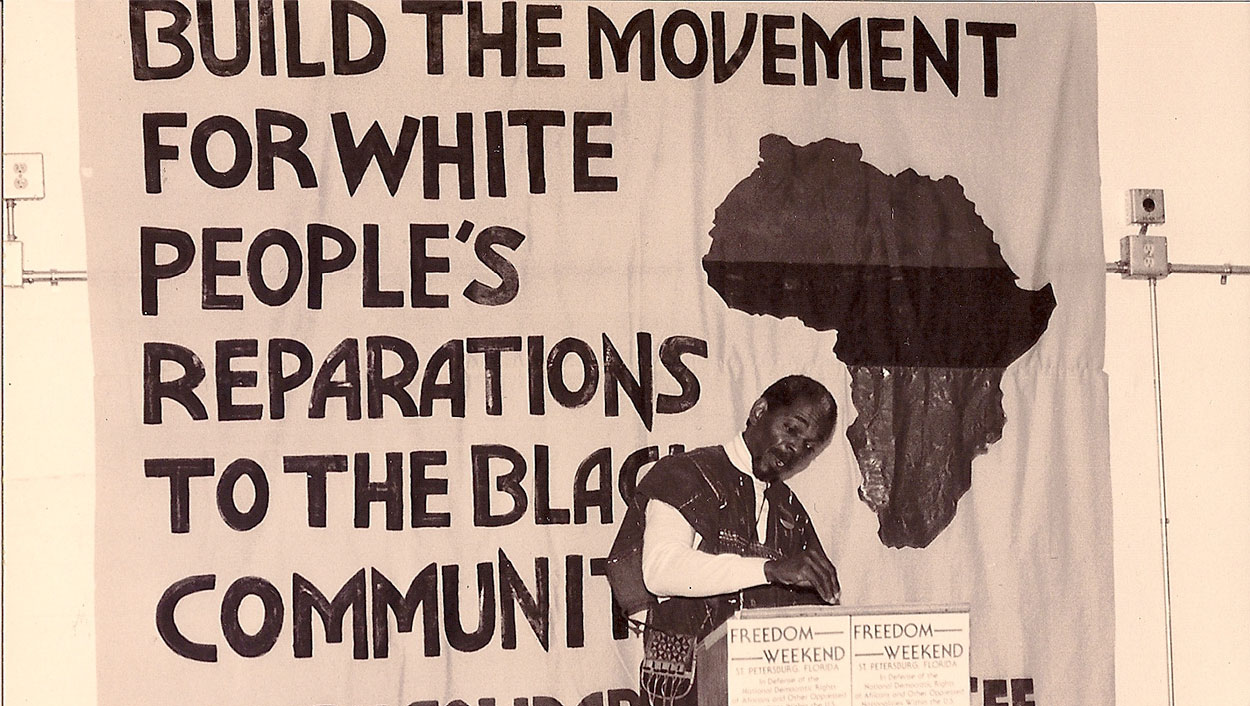 Chairman Omali and the African People's Socialist Party are making reparations a reality through decades of leadership, struggle and work.

Originally published in the October 2019 issue of The Burning Spear newspaper and republished with permission.

After 35 years of struggle, the African People’s Socialist Party (APSP) has succeeded in its goal to “make reparations a household word.”

These days everyone from the U.S. Congress to Democratic party politicians to professors and preachers are talking about reparations to African people.

Few, however, recognize the reparations demand as more than a payback for enslavement.

For the APSP, reparations is a revolutionary demand, tied to the struggle for total African Liberation—not charity, restitution or a one-time settlement.

Reparations is a demand that goes to the root of parasitic capitalism, which was built on the assault on Africa, the enslavement of African people on land stolen from the Indigenous people and the colonization of the majority of humanity.

The Party’s scientific, political understandings, encapsulated in the theory of African Internationalism—the worldview from the eyes of the African working class—show that all white people sit on the pedestal on the backs of African people.

Every dream and aspiration and our ability to make our dreams a reality comes through social wealth and democratic rights gained at the expense of African and oppressed peoples.

The African People’s Solidarity Committee (APSC), the cadre organization created by the Party and our mass organization, the Uhuru Solidarity Movement (USM), are therefore tasked with building a mass movement for reparations to African people as our main work in the white community.

This is why the main events of the Uhuru Solidarity Movement every fall revolve around a U.S.-wide tour, The Days of Reparations to African People.

This year’s tour is themed: “Reparations: A Revolutionary Demand,” taking place in eight cities between September and November 2019.

The Days of Reparations tour feature APSP’s Chairman Omali Yeshitela as the keynote speaker. He is joined on the program by other Party leaders as well as Penny Hess, Chair of the APSC and Jesse Nevel, Chair of USM.

In 1982 the African People’s Socialist Party organized and led the World Tribunal of Reparations to African People, based on international human rights and genocide conventions of the United Nations.

Held in Brooklyn, NY, the Tribunal indicted the U.S. government in genocidal crimes against the African community.

Subsequent sessions of the Reparations Tribunal were held in cities throughout the U.S. and Europe 12 times, creating a true liberated judicial institution of dual and contending power in the hands of the African working class.

The international panel of judges at the first Tribunal ruled that the U.S. government owes African people $4.1 trillion dollars in 1982, for stolen labor in the U.S. alone.

Over many years subsequent to the Tribunal, APSC held walks and marches against genocide in white
communities demanding reparations to African people.

We held our first African People’s Solidarity Day in Oakland and Philadelphia in 1991, the precursor to today’s Day of Reparations to African People.

In 2001, the APSP put reparations on the ballot when Chairman Omali ran for mayor in St. Petersburg, FL.

In 2009, the Party formed the Black is Back Coalition for Social Justice, Peace and Reparations, which has since marched on the white house every November against U.S. wars at home and abroad and for reparations!

In 2017, the Party again put reparations on the ballot in St. Petersburg when they ran Party member Eritha Akilé Cainion for city council on the slogan “Radical Times! Radical Solutions!”

Her running mate was USM Chair Jesse Nevel who ran for mayor on the slogan, “Unity through Reparations!”

Akilé gained national attention when her candidacy was featured in Ebony magazine and candidate Jesse was seen by tens of thousands when an anti-African attack on his campaign by another mayoral candidate went viral.

Seen by tens of thousands of people in the U.S., this powerful campaign laid the basis for mainstream democratic party candidates to pick up the call for reparations as a critical ballot issue.

In the primary election on August 27, Akilé won the votes to face the incumbent on the ballot in the general election on November 5.

In St. Petersburg, Akilé has again taken the reparations issue to a viral level with several videos shared by thousands of people throughout the city and the world.

The 2019 campaign, grounded in a mass movement of African workers, is galvanizing many forces to
openly support Akilé’s campaign for reparations and fighting gentrification.

On other fronts, the Party has an economic base of its political movement that operates at least 50 institutions of dual and contending power in the hands of the African working class.

Reparations for the Black Power Blueprint

In St. Louis, the Party has built the Black Power Blueprint, a dynamic program on the predominantly African northside of St. Louis featuring community projects including the complete renovation of the Uhuru House Community Center, the outdoor event space for the “One Africa! One Nation!”

Marketplace, a community basketball court, Jiko bakery and cafe, and much more.

Check out the Black Power Blueprint at blackpowerblueprint.org to findout more.

Black Power Blueprint is the focus of our reparations fundraising efforts at this year’s Days of Reparations.

Over $170,000 has already been raised for this campaign, much of this from white supporters and donors as a stand of reparations to the African Revolution.

The reparations raised by USM and the Days of Reparations do not go to an individual but to the APSP programs for power.

The revolutionary demand for reparations to African people goes to the very core of capitalism itself that was built on the pedestal of the assault and kidnapping of African people.

For us as white people, reparations to African people is the true redistribution of the wealth of the world and everything we have was stolen from Africans!

If you can attend an event, please make it a priority and travel if needed!

You do not want to miss this!

Nothing near you? Contact USM at uhurusolidarity.org to have a viewing party or bring Uhuru speakers to your area.

Join this dynamic movement that is changing the world every day!

There’s no greater moment than the present to end our allegiance to the white oppressor nation and join the rest of humanity!