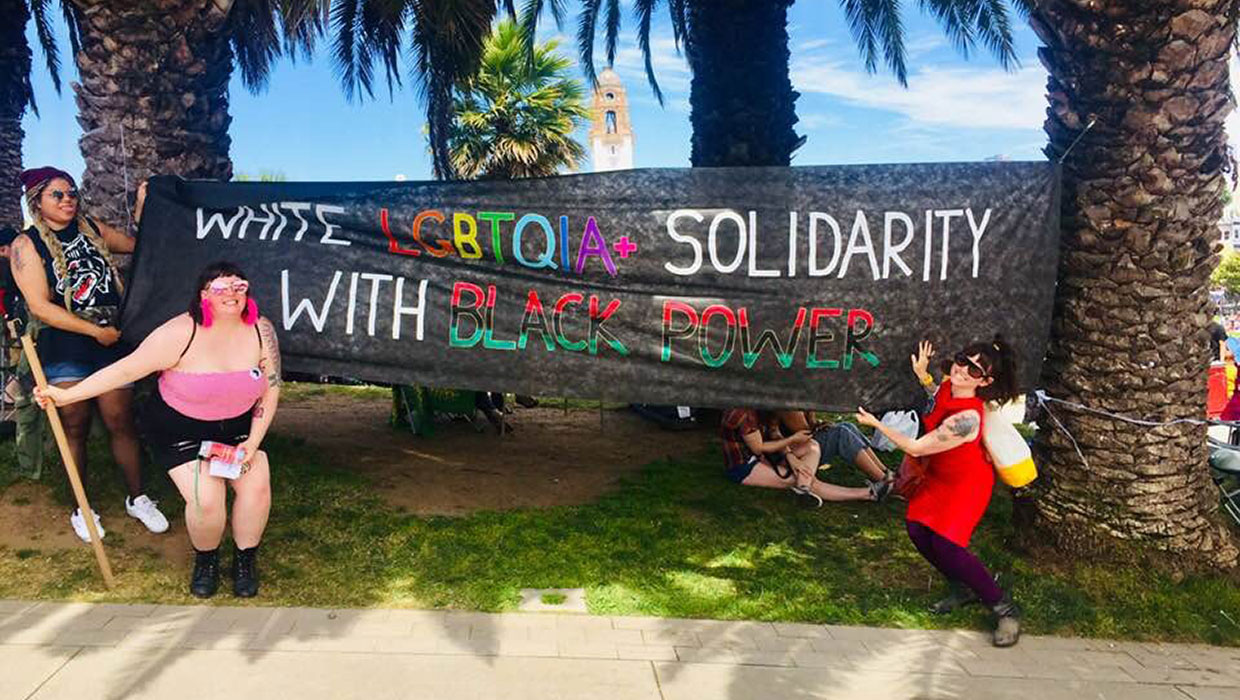 "No Pride" event in Oakland, CA

A new era for the white LGBTQIA+ community

“UNITY THROUGH… REPARATIONS!” and chants for “BLACK POWER!” were heard throughout Pride celebrations and marches in several cities around the country for the very first time in the month of June 2019.

This was the result of the “No Pride in Genocide: White LGBTQIA+ Solidarity with Black Power” campaign, coordinated by the Uhuru Solidarity Movement (USM).

USM is the white organization that works under the leadership of the African People’s Socialist Party (APSP) to extend the African Revolution into white society.

USM’s mission is to go into the white community and build a mass movement for white reparations to the African community.

During Pride month, USM’s “No Pride in Genocide” campaign claimed the leadership over the real, genuine progressive LGBTQ white population who are looking for a way to oppose and overturn the root of all oppression—the colonial-capitalist system resting on the pedestal of the enslavement of African people and genocide against the Indigenous people of this land.

During a month when the rainbow flag is hoisted up next to the American flag to represent a struggle for equality within the capitalist system, “No Pride in Genocide” was a U.S.-wide speaking tour and outreach campaign that gave white LGBTQ people the opportunity to declare that our flag is not the rainbow flag—a sign that has signified gentrification and complicity with imperialism. It is the red, black and green—a symbol of freedom for human beings under the leadership of the liberated African Nation!

We recognize that this system we are currently under is colonialism and doesn’t serve us as white queer and trans people either. White power is our enemy, too.

Our true liberation and freedom will be reined in with the unification of Africa and African people!

We must become a part of the strategy by joining Uhuru Solidarity Movement and the African People’s Solidarity Committee if we genuinely want oppression of all peoples to end.

We reject the white-led gay and trans rights movements because they are fighting to have equal rights with the oppressor.

We will not repeat history, but we’ll choose to unite with the black working class!

The 2019 campaign and tours reached hundreds!

Many people who were not originally there to march or chant with us were won over with outreach or just by simply hearing our stance on Black Power and reparations.

Crowds raised their fists in unity and appreciated this stance being brought to Pride.

We reached hundreds of North Americans. The people are uniting!

We also coordinated speaking tours in seven cities with speakers from the African People’s Socialist Party: Israel Fin, President of the International People’s Democratic Uhuru Movement, Kalambayi Andenet and the Director of Agitation and Propaganda, Akilé Anai. All had powerful presentations on the question of white LGBTQIA+ solidarity and how we can be on the right side of the question through reparations and being under the leadership of the APSP.

We presented on the white opportunism of the past and how the African People’s Socialist Party has created a way for us to unite with a movement that has our genuine interests. Black Power and reparations is the only way forward!

Over 25 new members have been consolidated, and over $3,000 was raised at these events.

More and more members are pouring in as the videos of these presentations and photos of these campaigns are shared.

We are confident that this African Internationalist political line will be echoed throughout this community indefinitely through the revolutionary work of USM members coordinating these campaigns.

Some cities have Pride events later on in the year, such as Asheville and Oakland.

We will continue to distribute pamphlets, hold events around this topic, and reach the people.

The white LGBTQIA+ community is an integral part of this movement of white solidarity with Black Power. We are contending with the white leftist opportunism of “Pride,” and WE ARE
WINNING!

White people must understand the colonial mode of production