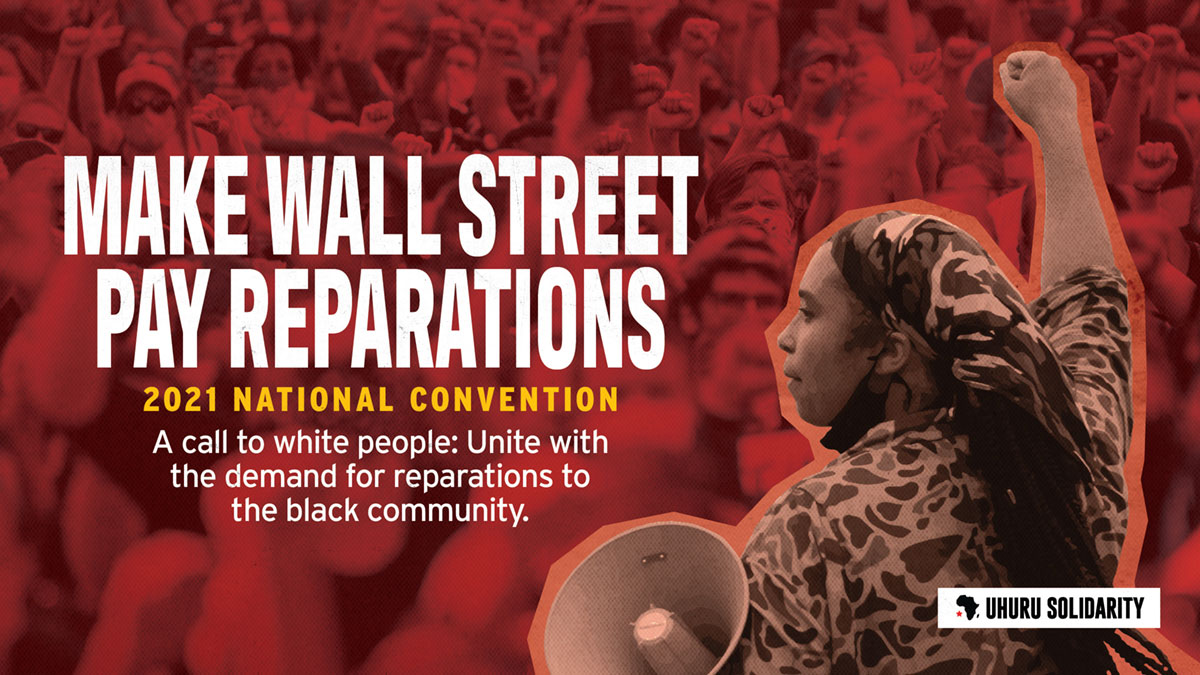 White people, it is time for us to turn our backs on our ruling class

Join the revolutionary movement for reparations under the leadership of the African working class. Register for the Make Wall Street Pay Reparations, National Convention of the Uhuru Solidarity Movement on April 17-18, 2021!

Take a stand against the filthy rich one percenters, greedy white billionaires and Wall Street elites whose wealth rests on genocide, enslavement, rape and plunder.

Demand reparations for the Black Power Blueprint: the historic program of African people resisting gentrification and rebuilding their community through their own initiative. African workers in north St. Louis are fighting to reclaim their resources to create the ability of the people to feed, clothe and house themselves.

Fight the real criminals. The tycoons of capitalism and robber barons of finance who make billions of dollars locking up the black community by the hundreds of thousands, who finance killer police forces and who steal the homes of African grandmothers through gentrification, redlining and bad mortgages.

This is the genteel elite who launder drug money offshore and support big pharma’s practices of putting tons of deadly addictive drugs on the streets.

These are the ones who back colonial wars and build weapons of mass destruction to maintain white power: who loot the African community daily by stuffing their pockets with resources that belong to the people.

This foul ruling class expects us white people to fight their genocidal wars carried out in our name, at home and abroad. They have no qualms about destroying the planet itself in order to make more profit and systematically do so daily. They expect us to live lives of self-serving consumerism, silence, despair and complicity with resources gained at the expense of African and oppressed peoples.

African worker-led anti- colonial struggle is sweeping the globe— from the streets of Minneapolis to the townships of Occupied Azania (South Africa). We cannot sit on the sidelines. This exuberant struggle has exposed the reality of colonialism inside this country and challenges us to choose sides— fighting for a dying parasitic imperialism or standing on the side of the leadership of the colonized— for a new world without the oppressors and the oppressed.

It is in our genuine interests, as white people, to take a stand in solidarity with the African working class and their struggle for self-determination and reparations by working under the leadership of African workers in the form of the African People’s Socialist Party (APSP).

Although most of us are not part of the “One Percent,” we recognize that as white people we all sit on the pedestal of the oppression of African people. All white people owe reparations. We have access to social wealth. And we must do our part in forcing our own ruling class to pay for their crimes against humanity, with which we have historically been complicit. Penny Hess, Chairwoman of the African People’s Solidarity Committee, says, “Reparations is a function of the struggle for black power, as defined and led by the African People’s Socialist Party. Powerlessness and poverty are functions of parasitic capitalism built on slavery, genocide and colonialism.”

“Make Wall Street Pay Reparations” is our way to declare that, as white people, we refuse to be complicit in a system where our prosperity, safety and democratic rights come at the expense of war, drone strikes in Pakistan and Syria, police murders of African men, women and children and gentrification that forces African families out of their homes and neighborhoods.

In 1989, in an article in The Burning Spear newspaper, Chairman Omali Yeshitela wrote:

“All the people who want to see a new world—everybody including poor white people—must turn loose their whiteness and join with the struggle of Black Power to overturn white power, which is the social system within which the poverty of white people occurs. So what white people have to do is turn loose their whiteness and fight against white power. They have to unite with the struggles of black power whose oppression and exploitation is the basis of the existing system that is oppressive and exploitative.”

Register for and attend the National Convention of the Uhuru Solidarity Movement: the mass organization of white people working under the leadership of the APSP during April 17-18, 2021.