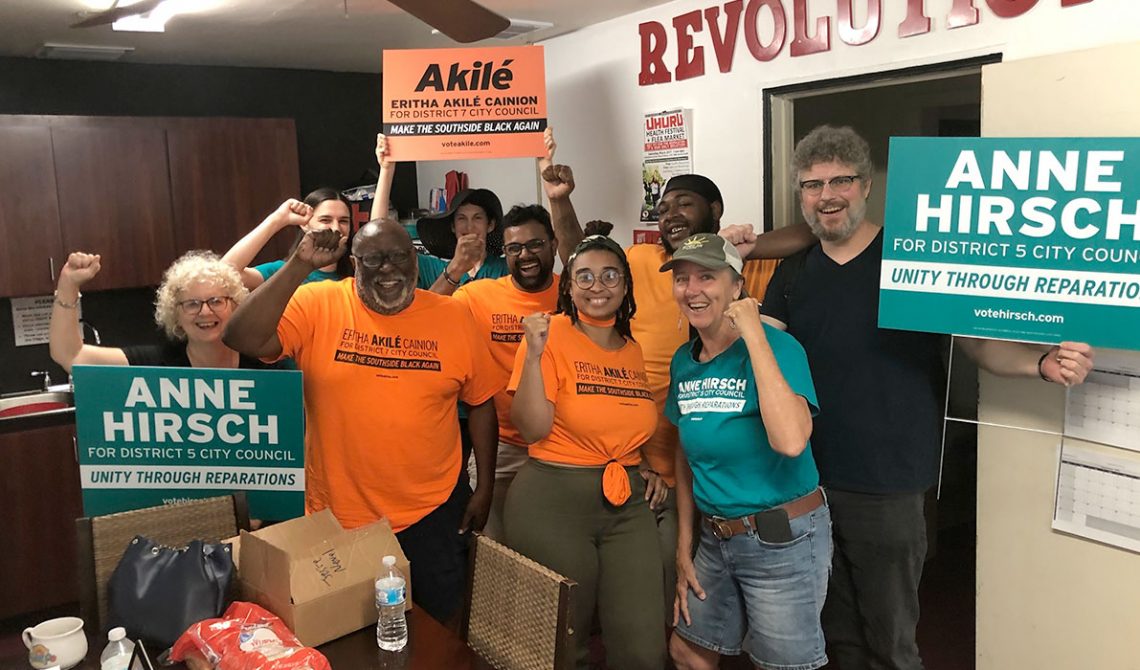 Originally published in the September 2019 issue of The Burning Spear newspaper and republished with permission.

That year, 200 people, mostly white, under the leadership of Eritha Akilé Cainion, marched down the majority white populated Central Avenue, chanting “Unity Through Reparations!” at the tops of our lungs.

Her slogan is “Make the Southside Black Again” to not just halt the gentrification of her community, but to reverse it through reparations, affordable housing and economic development.

Her running mate is Anne Hirsch, a white woman and leading member of USM, with a slogan of “Unity Through Reparations.”

Anne is running for district five city council in a “mixed” A.K.A gentrified community.

The impact of 2017 and the decades-long struggles of the Uhuru Movement on the white community of St. Petersburg, Florida is obvious—something I have seen myself as a white volunteer.

At a time when the city government of St. Pete is pushing the black community out of existence through police terror, gentrification and many other means, the Uhuru Movement calls on us in the white community to take responsibility for this destruction by uniting under the leadership of the black working class community in opposition to our white ruling class.

We are answering that call.

I am proud to join the candidates themselves and volunteers from throughout the Tampa Bay area and even from throughout the country in knocking on doors, phone banking, standing on corners and handing out literature, attending community meetings and debates, sharing the latest campaign news on social media and dropping off literature in neighborhoods throughout districts five and seven.

These campaigns for “Unity Through Reparations” and “Make the Southside Black Again” never rest and cannot rest until victory is won.

The very survival of the black community and even the continuation of white workers to live in this city is at stake.

Those who say they want to do more research find that no other candidates have a platform that addresses the needs of the people of St. Pete—if they have a platform at all.

Our ranks of white volunteers grow every week, with us slathering on sunscreen and refilling our water bottles to proudly bear the brutal heat of the Florida summer, smiles on our faces, to give the members of our community the opportunity to learn about these campaigns and make the choice to stand on the right side of history.

One of the main pieces of literature we hand out is the beautiful broadsheet newspaper created by these campaigns to counter the white power media whiteout of these revolutionary candidates and the people’s movement that supports them.

Naturally, the status quo does not want us in the white community to know how to oppose them.

When we hand out the broadsheet newspaper, we are enthusiastically thanked, whether on “official outreach” or sharing it with a loved one.

Those who receive it from us on outreach often run into us again and tell us that they shared it with others.

I myself have handed this broadsheet to friends, coworkers, Lyft drivers, to neighbors—always receiving a positive response.

Many of us come in solidarity to the Sunday rallies hosted by the International People’s Democratic Uhuru Movement (InPDUM) to meet the candidates.

These weekly rallies are held every Sunday from 3-5 pm at the Uhuru House, 1245 18th Ave. S. and livestreamed from Facebook.com/stpeteinpdum.

There, Eritha Akilé Cainion and Anne Hirsch speak to the urgency of the campaigns and delve deeply into the topic of the week.

Attendees hear reports on the success and progress of the different areas of the campaigns—voter contact, fundraising, social media, and many others.

The July 28 Sunday rally covered how the campaign for “Make the Southside Black Again” has gone viral through a video of Akilé crushing the insidious strategy of the white power media to divert attention away from the gentrification of the black community.

In that video, Akilé brilliantly stayed on message despite the Channel 8 News reporter’s attempts to get her off-topic (an interview Channel 8 never aired).

Jesse Nevel, the campaign manager for Anne Hirsch, got the interview on video with his phone and posted to social media.

No one in the campaign could have anticipated the overwhelmingly positive response of both the black and white communities to the video.

The African Diaspora News Channel aired Akilé’s undeterred defense of her community in the face of white power and called on their large audience to donate, resulting in nearly $10,000 to Akilé’s campaign in less than 48 hours! Eritha Akilé Cainion and Anne Hirsch made a follow up video, deepening the question of the responsibility of white people to stand in solidarity with the indisputable demands for reparations and economic development for the black community.

Right now, St. Pete is “a city divided” between the wealth of the white community and the forcible impoverishment of the black community.

But through becoming the first “reparations city,” we will repair and unite St. Pete—the “city of African resistance.”

Join the campaigns for “Unity Through Reparations” and “Make the Southside Black Again” at voteakile.com and votehirsch.com.

We are winning!
Reparations Now! Janice and Kyle show their support