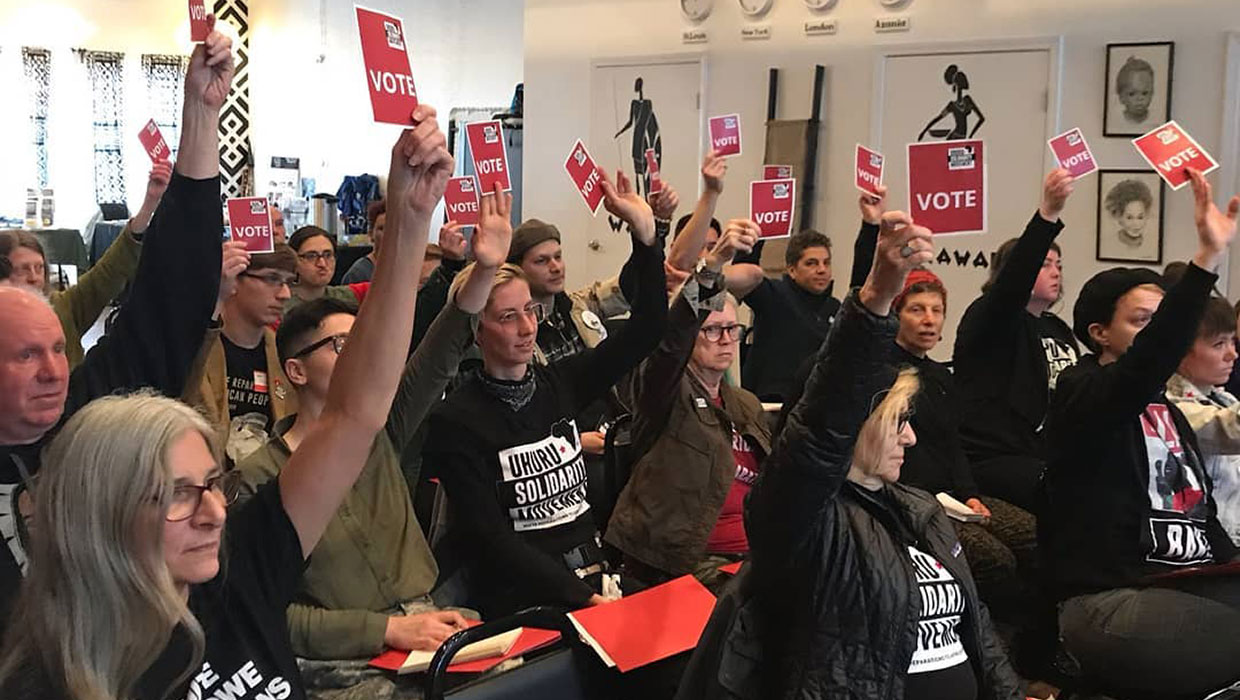 Originally published in the June 2019 issue of The Burning Spear newspaper and republished with permission.

On April 13-14, 2019 the African People’s Socialist Party launched the Uhuru Solidarity Movement into a new era of struggle with the USM national convention in St. Louis, Missouri.

The culture of reparations to African people is growing in white communities throughout the U.S., with the Uhuru Solidarity Movement currently able to count its membership in over 37 cities.

The atmosphere at the convention was one of overwhelming unity, revolutionary zeal and enthusiasm to build the mass movement for white reparations to African people under the leadership of the vanguard party of the African working class.

At a time when eight of the presidential candidates in the Democratic primary are making pretenses that they are in favor reparations to black people, the USM convention was an occasion to raise up the undeniable fact of history that it was the African People’s Socialist Party and Chairman Omali Yeshitela who made reparations a household word!

The Chairman made it his mission to take reparations out of the courtroom and classroom and into the streets!

Not only that, he developed a strategy to bring reparations into the white community itself by opening up a new front of struggle in the form of the African People’s Solidarity Committee. USM is APSC’s mass organization.

Themed “Make America Pay Reparations”, this year’s USM convention was held in the stunning Akwaaba Hall of St. Louis, the second year in a row where we have had the honor to gather in this amazing institution.

Akwaaba Hall is located in the Uhuru House, a creation of the Black Power Blueprint project spearheaded by Deputy Chair Ona Zené Yeshitela.

Deputy Chair Ona Zené and her office led the renovation process that transformed an abandoned building in a deeply impoverished north St. Louis neighborhood into a bedazzling showcase of African working class self-determination and style.

With its exposed brick wall, sparkling light fixtures, and a deep red stage adorned by an African design, the venue itself stood as a testament to the vanguard, the African People’s Socialist Party.

On Saturday morning those brick walls shook with the incredible presentations of our keynote speakers. It was an honor to host Chairman Omali Yeshitela, the foremost revolutionary theoretician of our time. This visionary strategic genius created the solidarity movement in 1976 when the APSP formed the African People’s Solidarity Committee, the cadre organization of white revolutionaries that carry out the Party’s strategy to extend the African Revolution into the white oppressor nation population.

Chairman Omali Yeshitela spoke throughout the conference about this new period in which we find ourselves today, a moment in history characterized by tremendous crisis for imperialism and a glaring opportunity for the oppressed peoples of the world to strike out and secure victory in their six hundred year quest to throw off the yoke of colonial slavery and take back their independence and freedom.

The Chairman made an impassioned call for white people to recognize that is not only our responsibility to join this strategic front of the African Revolution; it is in our deepest interests as human beings!

Penny Hess, the chair of the African People’s Solidarity Committee who has forged the stance of principled solidarity with Black Power since she joined APSC at its founding conference in 1976, gave a mind-blowing presentation that broke down the vast but ultimately incalculable enormity of wealth amassed by the various corporations, governments and white citizens’ formations that made profits off the brutal assault on Africa and African people.

From the insurance companies to the bourgeois universities throughout Europe and the United States, Chairwoman Hess showed that every millimeter of capitalist wealth is dripping in African blood.

Chairman Omali Yeshitela deepened this by pointing out that even after counting up the trillions upon trillions in stolen value ripped from Africa and Africans by parasitic white power, it is still and always will be impossible to truly quantify the value generated for the white world at the expense of stolen African life, labor and resources.

“How,” asked the Chairman, “do you quantify white life? White life itself would not be able to exist without the enslavement and colonization of African people. How do you put a dollar sign on that?”

This dialectic between white life and African oppression struck at the core of the USM convention. It was a call to action to white people to reject our relationship to this untenable relationship and to commit “national suicide,” through abandoning the interests of imperialism and joining under the leadership of the African Revolution.

Other speakers included Jesse Nevel, the chair of the Uhuru Solidarity Movement who spoke about the achievements of USM in this past year and the goals for the upcoming year to escalate our work to raise reparations to the African revolution!

These panelists brought vivid testimonies from the perspective of the raw experience of colonized African workers who face the conditions of colonial life every single day. They exposed the realities of the prison system, horizontal violence, the kidnapping agencies known as foster care and the ravages of gentrification and poverty.

KC Mackey, Ben Rosensweig and our young 12-year-old comrade Rowan, gave a fantastic call for resources that won nearly $20,000 in reparations to the programs of the Black Power Blueprint and showed how a white person’s life can be transformed when we make the choice to play our role in changing the world by joining the struggle for African liberation and reparations!

Coming out of the USM Convention, the Uhuru Solidarity movement is committed to carry out the Party’s regional strategy as laid out in Chairman Omali Yeshitela’s political report to the 7th Congress, “Vanguard.”

We will build the regional strategy to bring USM members into the Party’s many institutions which function as political-economic hubs of African Internationalism.

We will build Uhuru Foods & Pies, the Uhuru Furniture and Collectibles, the Black Power Blueprint and the many other Uhuru institutions that are dual and contending power projects in the hands of the African working class.

We will take the struggle for reparations to the moneyed sector of the white population, winning the “children of the bourgeoisie” to commit class and national suicide by paying reparations to that force which represents the only viable future: the reparations-based African workers’ economy!

We are now hosting a tour called “No Pride in Genocide” to build white LGBTQ solidarity with Black Power, while challenging the historic opportunism of the white-led “gay rights movement” that has sought to make imperialism gentler to one marginalized sector of white people while maintaining the pedestal of colonial-capitalist oppression.

“No Pride in Genocide” is the slogan of many white LGBTQ people who are joining the Uhuru Solidarity movement who believe that our genuine freedom is found in solidarity with African Liberation, the struggle to end all forms of oppression rooted in the enslavement and exploitation of African people. The No Pride in Genocide Tour will be taking place in Oakland, CA; St. Petersburg, FL; St. Louis, MO; Seattle, WA and Portland, OR. You can join USM and find out more about this tour at uhurusolidarity.org

All out for the November 5 Black is Back Coalition March on the White House!

White solidarity with Black is Back!