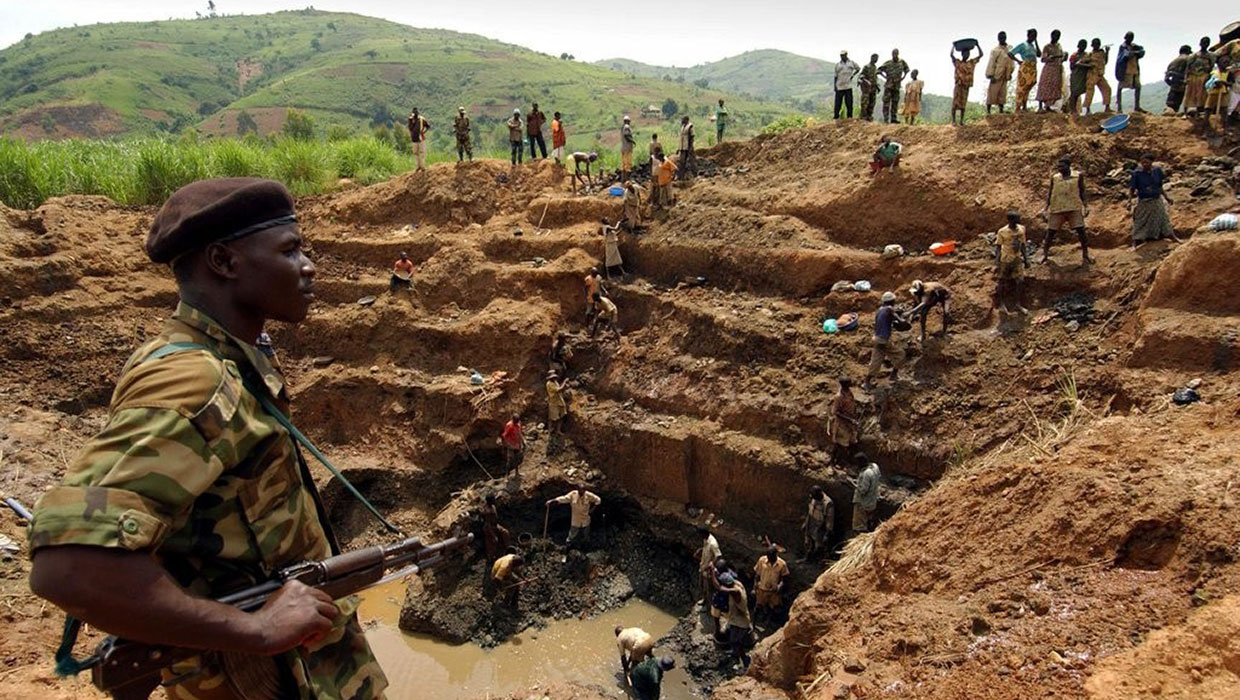 “All Diamonds Are Blood Diamonds,” is the slogan raised by the Uhuru Solidarity Movement in response to the white liberal campaign against “blood” or “conflict”  diamonds during the U.S. Central Intelligence Agency (CIA)-backed colonial war in Sierra Leone from 1991 to 2002.

The fact is there is no such thing as a diamond from Africa that is not stolen from African people and tainted with African blood shed during the ongoing colonial war against them.

The white liberal struggle against blood diamonds is, in fact, a campaign that benefitted a colonial mining giant, De Beers Diamond cartel.

The Blood Diamonds campaign fought against any diamonds sold on the open market by “rebels” or others in African countries that were not connected to De Beers Diamonds. The cartel demanded that all diamonds be certified through what is called the Kimberley Process, controlled by De Beers and named after the Kimberley region where the mines are located.

De Beers is the mining company founded in the 1880s by Cecil John Rhodes, the brutal British colonizer whose goal was to take over Africa from the Cape (Cape Town, South Africa) to Cairo (Egypt) for the benefit of British imperialism and all its citizens—the bourgeoisie and workers alike.

British colonizer Rhodes was the architect of South African apartheid modeled on the “Jim Crow” colonial conditions for African people inside the U.S.

A believer in the “Anglo-Saxon master race,” Rhodes stole about one million miles of southern African land for the British and himself personally.

Rhodes was responsible for the slaughter of hundreds of thousands of African people and the enslavement of tens of thousands more in the diamond mines, generating massive wealth that created the parasitic capitalist economic foundation for what is now known as “South Africa.”

According to the U.K. Daily Telegraph article on December 22, 2015, Rhodes’ “establishment of a paramilitary private army, the British South Africa Company’s Police (BSACP) resulted in the systematic murder of approximately 60,000 people; his amendment of the Masters and Servants Act (1890) reintroduced conditions of torture for black laborers; his infamous racist “land grabs” set up a system in which the unlawful and illegitimate acquisition of land through armed force was routine.”

Fast forward to 1991 when neocolonial president Charles Taylor of Liberia was brought to trial and convicted by a special court on April 26, 2012 on charges of murder, rape and pillage of the people of neighboring Sierra Leone.

Employed by the CIA “for years” according to a 2012 article in the Boston Globe, Taylor was also convicted  and sentenced to 80 years in prison for planning the 1999 attacks on Kono, Makeni and Freetown, Sierra Leone along with the Sierra Leone rebel group, the Revolutionary United Front (RUF).

The RUF, backed by Taylor and the CIA, waged a coup attempt in 1991 against the then Sierra Leone president, leading to the 11-year bloodshed that murdered 50,000 African people with millions of families forced to flee from their homes in the face of torture, rape and mutilations.

The RUF mutilations included the cutting off of hands of thousands of Africans, a vicious act mimicking the terrorism imposed on the Congo by the Belgian colonizer King Leopold in the early 20th century.

This West African colonial war was a bloody, violent fight over control of the valuable African land of Sierra Leone, where mining accounts for about 80 percent of the colonial economy (of which diamonds are nearly 50 percent) in a country where more than 60 percent of the population lives on less than $1.25 a day in the multi-billion dollar U.S. and European mining industry.

The RUF is said to have gained control of a couple of diamond mines and sold diamonds as mavericks on the open market, much to the dismay of long-time criminal De Beers cartel.

All white people sit on the pedestal of slavery and genocide

Cecil Rhodes understood well that all white people, including all white workers, sit on the pedestal of the enslavement and colonization of African people as Chairman Omali Yeshitela has shown.

He understood that capitalism is parasitic, born and maintained at the expense of Africans and other colonial subjects.

Rhodes once stated: “I was in the east end of London (a working-class quarter) yesterday and attended a meeting of the unemployed. I listened to the wild speeches, which were just a cry for ‘bread! bread!’ and on my way home I pondered over the scene and I became more than ever convinced of the importance of imperialism…

“My cherished idea is a solution for the social problem, i.e., in order to save the 40,000,000 inhabitants of the United Kingdom from a bloody civil war, we colonial statesmen must acquire new lands to settle the surplus population, to provide new markets for the goods produced in the factories and mines.

“The Empire, as I have always said, is a bread and butter question. If you want to avoid civil war, you must become imperialists.”

The African People’s Solidarity Committee (APSC) is an organization of the African People’s Socialist Party (APSP) as part of its strategy for nothing short than the total liberation of Africa and African people and the return of its land and minerals as well as the value of its stolen labor.

The main work of APSC, under the leadership of the Party, is to win reparations to the African Revolution from white people inside Europe, the U.S. and around the world.

APSC’s mass organization, the Uhuru Solidarity Movement, continues to raise the slogan, “All diamonds are blood diamonds,” as a stand of white people’s reparations to African people.

You can join many other white people in donating your diamonds to the African Revolution at uhurusolidarity.org.

Your diamonds will be turned over to Black Star Industries, the economic front of the African People’s Socialist Party where they will become part of the economic foundation of a liberated Africa led by the African working class for the benefit of the entire African Nation.