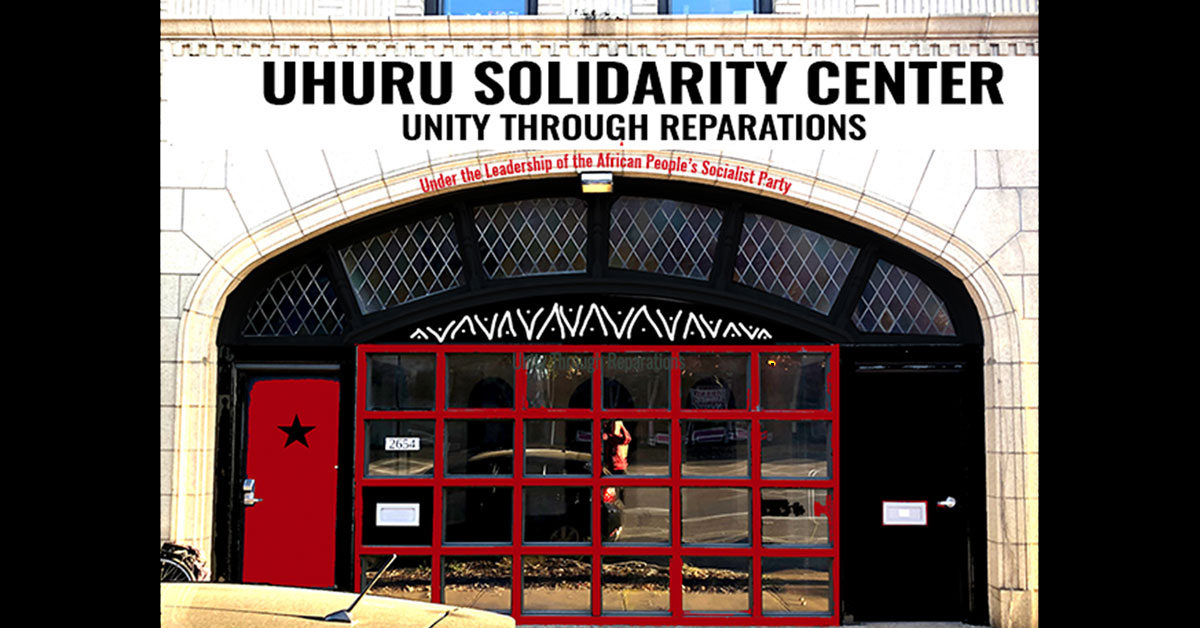 For the first time in the history of St. Louis, a 20 foot sign will be attached to a commercial building in the white community announcing, “Unity through reparations! Uhuru Solidarity Center, under the leadership of the African People’s Socialist Party.”

Located on a busy street not far from the downtown area, the solidarity forces moved into the building in September and are in the process of making renovations, including repainting the walls and floor of the front room and the trim on the building’s facade. A grand opening is slated to be held in the spring of this year.

What is to be done with white people

More than 45 years ago Chairman Omali Yeshitela and the Party solved the problem of what to do about the white people with the formation of the African People’s Solidarity Committee (APSC) under the Party’s direct leadership.

Over the past decades APSC members have been won to become African Internationalists, functioning as Black Power in white face inside the white population under the leadership of the Party.

For nearly a half century APSC has carried the message to the white population that capitalism was born through the assault on Africa and the enslavement of African people, and that all white people sit on the pedestal on the backs of African and oppressed peoples.

APSC has played a role in the Party’s work to popularize the reparations demand and to win the understanding among white people that the main problem facing African people today is colonialism, not racism. Indeed, as Chairman Omali Yeshitela teaches us, “colonialism is the mode of production for the entire capitalist system.”

The existence of the Uhuru Solidarity Center with its message of reparations to African people has special significance in St. Louis which played a key role in white colonial violence against African and Indigenous people. This is the city where the brutal military genocidal assaults on the Indigenous people were staged for a century out of the city’s Jefferson Barracks.

This is the city where African people were sold on the steps of city hall and where Dred Scott was told that African people had no rights that white people needed to respect.

This is the city that kidnapped 10,000 African, Indigenous and other colonized people from the U.S. and around the world to populate the more than 65 “human zoos” that were a major attraction for the mobs of white visitors at the 1904 World’s Fair.

This is St. Louis where white people did everything possible to destroy proud, thriving African communities, businesses, homes, hotels, jazz clubs, culture, schools and the first African hospital and medical school west of the Mississippi.

This is the city where the police murdered Mike Brown in 2014, leaving his body lying in the hot August sun for more than four hours sparking fierce African resistance.

And this is the city where since 2017 the African People’s Socialist Party has built the ever advancing Black Power Blueprint on the Northside of St. Louis, a program coordinated by Party Deputy Chair Ona Zené Yeshitela that includes the Uhuru House, the community garden, the One Africa! One Nation! Farmers Market, Jiko Kitchen and Café, a community basketball court, a women’s center and so much more!

White people who want to rectify our relationship to African people can come to the Uhuru Solidarity Center to take a stand of genuine solidarity with the movement for power in the hands of the African working class through fighting for reparations to African people.

Uhuru Solidarity Center will hold events, studies, workshops, volunteer days of canvassing and outreach, bringing the culture of reparations to white people. The center will engage white people that peace and prosperity shared by all can only come under the leadership of the African Revolution, leading the world in creating a society without the oppressors and the oppressed.

For more information on the Uhuru Solidarity Center, contact us at info@apscuhuru.org.

USM to kick off National Convention with bold action at the Arch in St. Louis, Missouri!

Uhuru Solidarity Movement, APSC’s mass organization of white people working under the leadership of the African People’s Socialist Party, plans to kick off its upcoming annual National Convention with a major, bold political action at the so-called “Gateway Arch” in St. Louis, Missouri.

Planned for March 18-20, 2022 the Convention is themed “Unity through Reparations! Reparations through Organization!” and will put in practice the Party’s mandates for USM to build its regional infrastructure, branches, speaking tours, and massive recruitment of volunteers and members into the Party-led organization of white solidarity with Black Power.

Featuring keynote speakers Chairman Omali Yeshitela, Deputy Chair Ona Zené Yeshitela, and APSC Chairwoman Penny Hess, the Convention will be held virtually on Zoom, with the goal to win white people to recognize that our responsibility, our interests and our future are found in the revolutionary anticolonial struggle for reparations to African people–the struggle to overturn the “colonial mode of production” and repair the damage of 600 years of pillage, rape, looting and colonial violence.

The kick-off event, the “Rally for Reparations,” will occur on Friday, March 18 at 12pm at the base of the Arch in St. Louis, an infamous monument symbolizing the colonial genocide of the Indigenous people, built through the demolition of an African community over 50 years ago.