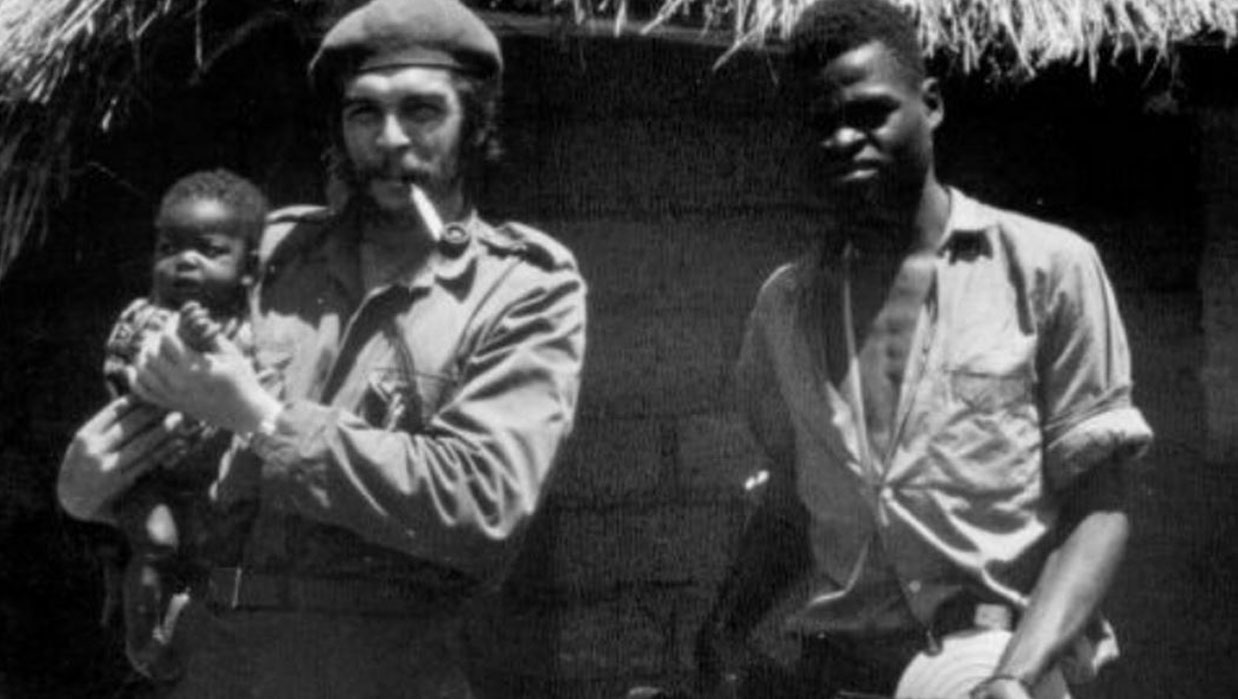 Che in the Democratic Republic of Congo providing aid in the struggle against U.S. imperialism

Originally published in the February 2019 issue of The Burning Spear newspaper and republished with permission.

Travel to any corner of the globe and you will find someone a wearing a t-shirt bearing the face of the beloved “heroic guerrilla” Che Guevara, whose life of resistance and revolutionary struggle continues to inspire freedom loving people today.

Born in Argentina in 1928, Che was a comandante of the Cuban People’s Revolutionary Army, which was victorious in 1959.

In 1967, he was brutally assassinated by the Central Intelligence Agency (CIA) in Bolivia where he was leading a people’s guerrilla struggle.

Upheld by the masses of oppressed and colonized peoples throughout the world, Che will forever be seen as the martyr of the courageous struggle of oppressed peoples for liberation and self-determination against U.S. imperialism.

Legions of young white people in the U.S. wear Che shirts. His iconic image with a beret and beard is cool, romantic and at times trendy.

It takes more than a beret, a beard or a camo shirt, however, to actually “live like Che.”

Che was cadre—a dedicated, disciplined revolutionary who as part of a revolutionary organization did whatever was necessary to forward the struggle of the oppressed peoples of the Earth.

In “The Cadres: Backbone of the Revolution,” written in 1962 during the early days of Liberated Cuba, Che explained:

“We should say that a cadre person … is an individual of ideological and administrative discipline, who knows and practices democratic centralism and who knows how to evaluate the existing contradictions in this method and to utilise fully its many facets; who knows how to practice the principle of collective discussion and to make decisions on his own and take responsibility in production; whose loyalty is tested, and whose physical and moral courage has developed along with his ideological development in such a way that he is always willing to confront any conflict and to give his life for the good of the revolution.

“Also, he is an individual capable of self-analysis, which enables him to make the necessary decisions and to exercise creative initiative in such a manner that it won’t conflict with discipline…

“Intimately tied to the concept of cadre is the capacity for sacrifice, for demonstrating through personal example the truths and watchwords of the revolution. The cadres, as political leaders, should gain the respect of the workers by their actions. It is absolutely imperative that they count on the respect and affection of their compañeros, whom they should guide along the vanguard paths.”

As the crisis of imperialism deepens daily, as every front of imperialist white power and parasitic capitalism crumble exposing the raw, brutal, disgusting nature of the beast, thousands of white people, young and old are searching for answers and direction for making a new world.

Seeing the heroic resistance of young African people on U.S. streets and the fight back of young Palestinians on the streets of Gaza, many of us are searching for revolution.

We reject our lives of mindless consumerism, ignorance of convenience and self-imposed isolation from everyone else that comes to us at the price of terror and violence against colonized peoples.

We reject life on the pedestal of the capitalist social system built on the stolen labor, land and resources of enslaved African people, slaughtered Indigenous people and oppressed and colonized people around the world.

We detest this government’s assumptions of our unity with the gunning down and locking up of African people and the drone strikes, imposed impoverishment and military occupation of the majority of humanity in our name.

We want to be part of world community, not parasites sucking its blood. We want reparations to African people. We want justice and genuine peace.

The African People’s Socialist Party is led by Chairman Omali Yeshitela who developed the political theory of African Internationalism and who has fought to keep alive and complete the Black Revolution for more than 50 years.

Like Che and other revolutionaries before him, Chairman Omali Yeshitela has been jailed, attacked and beaten for his unwavering and principled stand upholding the African working class.

Over the years, the Party has built numerous mass organizations meeting the needs of the people and waged countless campaigns fighting back the state’s attacks on the African working class.

The Party has built organized, revolutionary resistance against everything from police terror, mass imprisonment, housing and homelessness and the conditions of African children in the colonial schools.

The Party has built scores of economic institutions representing self-determination for African people.

The Party has stood in principled unity with the Indigenous and Mexican people, the Palestinians, Nicaraguans, Irish and all oppressed and struggling peoples.

The Party has built the African Socialist International with organization on the ground throughout the U.S., Europe and Africa.

Chairman Omali and the African People’s Socialist Party has withstood countless attacks by the U.S. government and those doing its bidding who attempt to bring down the only organization fighting to win economic and political power for the oppressed African masses.

The Party has extended the African Revolution into the white community by creating the African People’s Solidarity Committee (APSC).

The work of APSC is to win other white people to recognize our interest in standing in solidarity with the African liberation movement and reparations to African Revolution as the foundation of the liberated African economy.

This is how we become true revolutionaries by fighting for true socialism. Capitalism was born as white power on the backs of African people.

Socialism will be born with the destruction of parasitic capitalism under the leadership of the African working class.

To join APSC is to become cadre, to genuinely stand with Che.

Get organized under the leadership of the organized African working class building a new world without the oppressors and the oppressed, without war and suffering, a world in which all human beings will be free, no one at the expense of another.