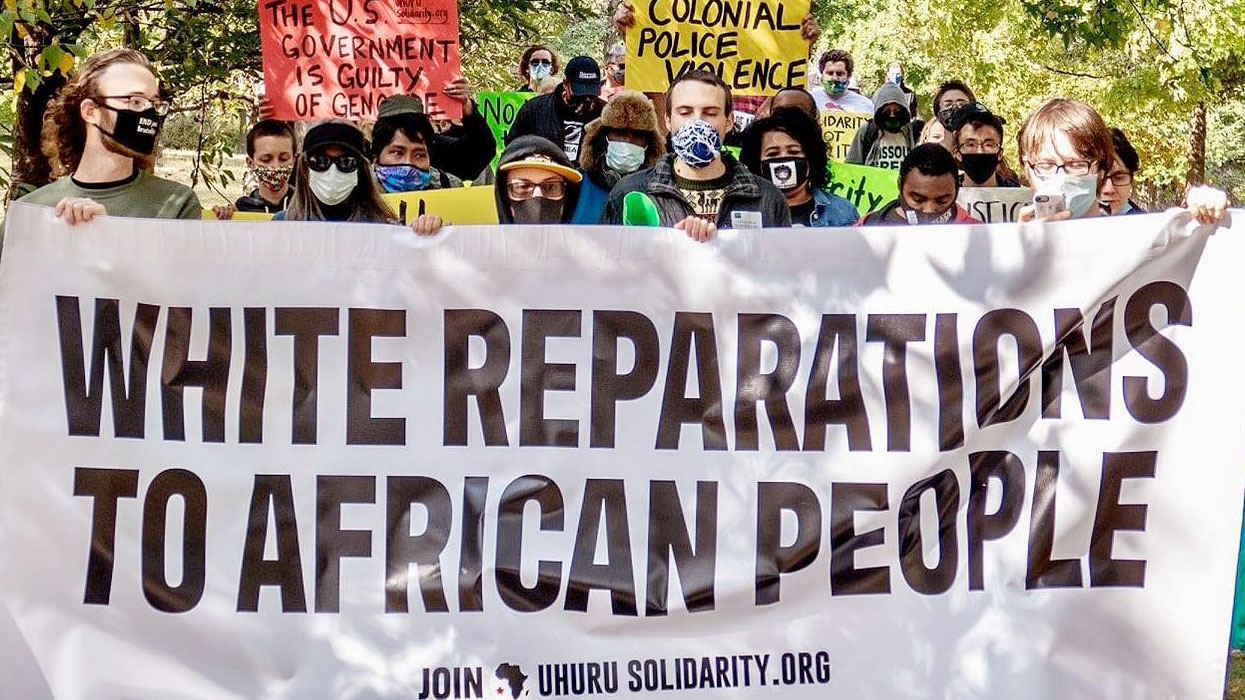 On Saturday, October 17, 2020, the African People’s Socialist Party (APSP) made history once again. In six states across the U.S., white people marched under the leadership of the African Revolution to build unity with the demand for reparations to African people for centuries of ongoing oppression and colonial terror.

The March for Reparations to African People was coordinated by the Uhuru Solidarity Movement (USM) to mobilize the white community to go beyond protest and get organized under the leadership of the African working class.

USM is the organization of white people formed and led by the African People’s Socialist Party, organizing in the white community to build solidarity with African liberation and white reparations to African people.

In every time zone in the U.S. on October 17, demonstrators marched through the streets of white neighborhoods and commercial districts chanting “Unity through Reparations!”

The Uhuru Solidarity Movement was honored to host a powerful line-up of leaders from the African People’s Socialist Party as keynote speakers at the mobilizing rallies that brought each march for reparations to a close.

In St. Petersburg, Florida, Chairman Omali Yeshitela, founder and leader of the APSP and the Uhuru Movement, delivered an electrifying presentation about the historic and ongoing struggle of colonized African people to seize power over their lives and destroy colonial oppression once and for all.

As white people gathered to listen by the waterfront in Vinoy Park with the multi-million dollar St. Pete Pier in the backdrop, the call for reparations to African people rang loud and clear.

Other Party leaders who spoke at the marches throughout the country included Kalambayi Andenet, the President of the International People’s Democratic Uhuru Movement (InPDUM), Ticharwa Masimba of the African People’s Socialist Party, Akilé Anai, APSP Director of Agitation and Propaganda, Matsamela Odom, Vice President of InPDUM and Jainabah Phillips of the APSP San Diego, Sobek Meri-Ra of the APSP Los Angeles, Yejide Orunmila of the African National Women’s Organization and Azadeh Ardakani of InPDUM Portland.

Penny Hess, Chair of the African People’s Solidarity Committee, addressed the crowd in St. Louis, declaring: “It’s going to take more than a march to overturn colonialism. We must get organized under the leadership of the African working class.”

Chairwoman Penny’s winning presentation inspired white people to join the movement for reparations under the leadership of the African People’s Socialist Party.

The marches gained media coverage including a television news segment on San Diego local news and a write-up in The San Diego Union-Tribune.

The 2020 March for Reparations was historic in part because it represented a deepening of the 44-yearlong strategy of the APSP to extend the struggle for African liberation and reparations into the heart of the white oppressor nation population.

The African People’s Solidarity Committee has held marches against genocide, organized reparations mobilizations and built fundraising institutions over the past four decades based on the Chairman’s scientific strategy. White people’s role and responsibility as beneficiaries of imperialism must be to struggle within the white community to build reparations in action.

Now the Chairman is calling for USM to go to the next level and challenge the moneyed sector of parasitic capitalism including the white ruling class corporations and bankers to pay reparations to the Black Power Blueprint.

It is a call for white people to wage real class struggle with our own ruling class, a break from our opportunist tradition of competing with our ruling class for access to the stolen resources of African people.

The campaign to Make Wall Street Pay Reparations and build the Reparations Legacy Project is the means by which white people can engage in principled class struggle on the side of the true workers of the world, the African working class.

White people are invited to join the Reparations Legacy Project to organize other white people with access to financial wealth to redistribute the stolen wealth towards the African independent economic development programs of the Black Power Blueprint.