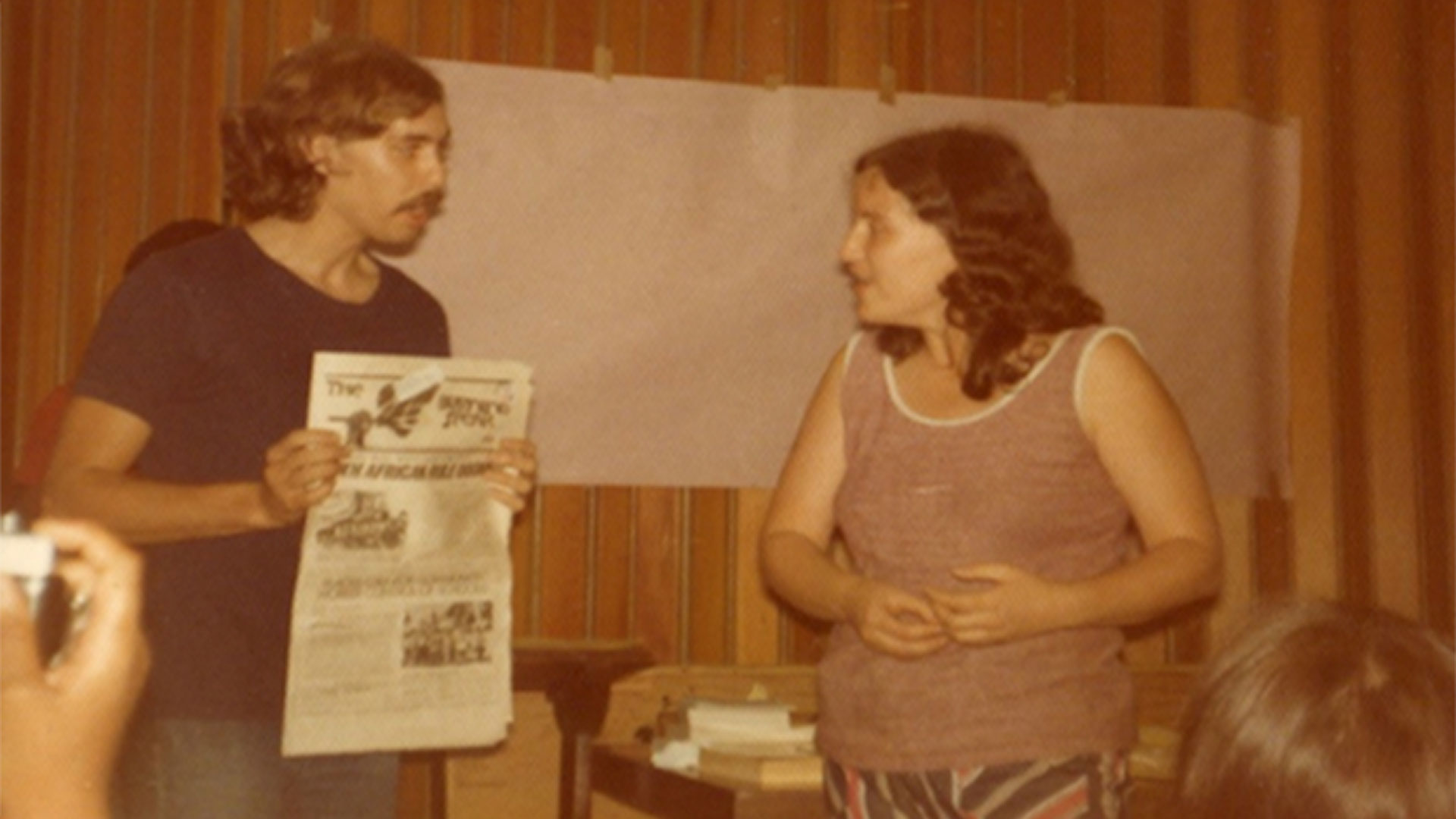 At the founding conference of the African People's Solidarity Committee, members commit to study and support The Burning Spear newspaper

Photo: At the founding conference of the African People’s Solidarity Committee, members commit to
study and support The Burning Spear newspaper

Suddenly, the question of whether white people should be organized under the leadership of African (black) people is being debated on many fronts.

This question, though, was already answered by the African People’s Socialist Party way back in 1976 with a resounding “Yes!”

In the wake of massive resistance sparked by the African working class in response to the brutal murder of George Floyd in May of this year, millions of white people from all walks of life came out and marched in solidarity.

For the first time since the 1960s, a significant portion of the white population took a public stand on the side of the struggle of African people in this country.

The fierce African-led uprising in the wake of George Floyd’s murder targeted police stations, demanded defunding of police and an end to the daily U.S. violence targeting African people.

Every monument and statue representing white power and colonial oppression was targeted or forced to be removed.

Newspapers ran article after article exposing the two vastly different sets of conditions in the U.S., from the death rate of COVID-19 (up to four times greater for African people than for whites) to the ever growing wealth gap, such as in Boston where white people have 31,000 times more money ($240,000) than African people, who have $8 in assets.

It was this current African fightback that forced millions of white people to have to take a long, hard look at the depth of the political, economic and social violence faced by African and oppressed peoples inside the U.S.

The resistance forced many of us to begin to acknowledge for the first time that our prosperity requires the suffering of the oppressed.

It was the African People’s Socialist Party, however, that had laid the basis for this current mass white awakening decades ago with the formation of APSC.

Chairman Omali Yeshitela has spent his life tirelessly teaching the world in theory and practice that the struggle of African people runs deeper than “racism,” the ideas in the heads of white people.

African oppression is indeed “systemic” and there is a scientific word for it known and experienced by oppressed peoples around the world: colonialism.

Colonialism is the total domination of a people by a foreign and alien State power for the economic benefit of the entire colonizer nation.

The colonial State is the armed power – including the police, the military, the prisons and courts – that violently protects the interests of the ruling class and the entire colonizer nation.

Whether it was Vietnam under the French, Kenya under the British or African people inside the U.S. forced to live in an impoverished neighborhood right across the Delmar Divide from you, the conditions of colonialism are the same.

As Chairman Omali Yeshitela has scientifically proven: the wealth and power of the entire white world and capitalism itself is built on the assault, kidnapping, sale and enslavement of African people, the genocide of the Indigenous people and the theft of their land, and the violent occupation of peoples around the world.

Therefore, all white people, regardless of class or gender, are part of the colonizer nation. Being part of a colonizer nation has a profound way of making us love our oppressive, violent and filthy ruling class and parasitic capitalist system.

Being a colonizer creates in us a willingness to fight the colonial wars and rape and plunder for our ruling class, regardless of the human price here or anywhere in the world.

As long as we get at least a little something to fill our stomachs and bank accounts, we are content and apathetic to the suffering of those around us that is necessary for our way of life.

We have fought our own ruling class only when we felt that we did not get our fair share of the colonial loot or privileges.

So the African People’s Socialist Party was very clear all these decades ago that white people, left to our own devices, could never take a principled stand in solidarity with African people.

Mired in opportunism as the footsoldiers of the colonizer nation perched on the pedestal resting on the backs of African people and oppressed humanity, white people had to be organized under the leadership of the African Revolution.

APSC fractures white unity with our own ruling class

This is why the formation of the African People’s Solidarity Committee by the Party in 1976 was so profound.

As Chairman Omali Yeshitela, leader of the Party and APSC, summed up in his political report to the January 2020 Party plenary:

“In 1976 the Party opened a critical new front in our struggle with the creation of the African People’s Solidarity Committee. Through this organization of white colonizer nationals, the Party took the struggle for black power into the cities, communities, neighborhoods and homes of the colonizers.

“With the solidarity committee, we created a division of labor that contributed to the ability of the Party to concentrate primarily on the political struggles directly confronting our colonized nation. APSC actively works to fracture the reactionary unity of the colonizer nation through winning political and material solidarity from among the colonizers.

“Indeed, the absolute unity of white people with their own ruling class has been forever fractured by the existence of the African People’s Solidarity Committee.

“The African People’s Solidarity Committee works directly under the leadership of the Party. This is crucial because of the role played by opportunism in undermining our struggle against colonial capitalism.

“Of course, a significant location of this opportunism has been with the participation of colonizer nation whites–liberals and leftists. Their comfortable place on the pedestal of our colonial oppression made it possible and likely that they would fight and settle for political solutions that fell far short of destruction of the colonialism that fed, clothed and housed them.”

The current brilliant African resistance has forced the colonial reality into our lives.

The struggles boiling up under this pedestal on which we stand have not gone away and are not resolved. Another African person is being gunned down, locked up or forced into hunger and homelessness right now.

It is the essence of this blood soaked land and, like a volcano, struggle waits to erupt again another day.

It is time for white people to do more than march or protest or fight racist ideas.

It is time to get organized under the leadership of the African working class building around the world for the final offensive that will liberate Africa and African people everywhere once and for all.

We have been given a strategic role to play, “behind enemy lines” as black power in white face, winning as many other white people as possible to stand in genuine solidarity with the African anti- colonial movement.

It is time to be organized to pay reparations, return the stolen wealth to the hands of the African working class to do what we cannot do: lead the struggle for a new world without oppressors and the oppressed for the happiness of all human beings.