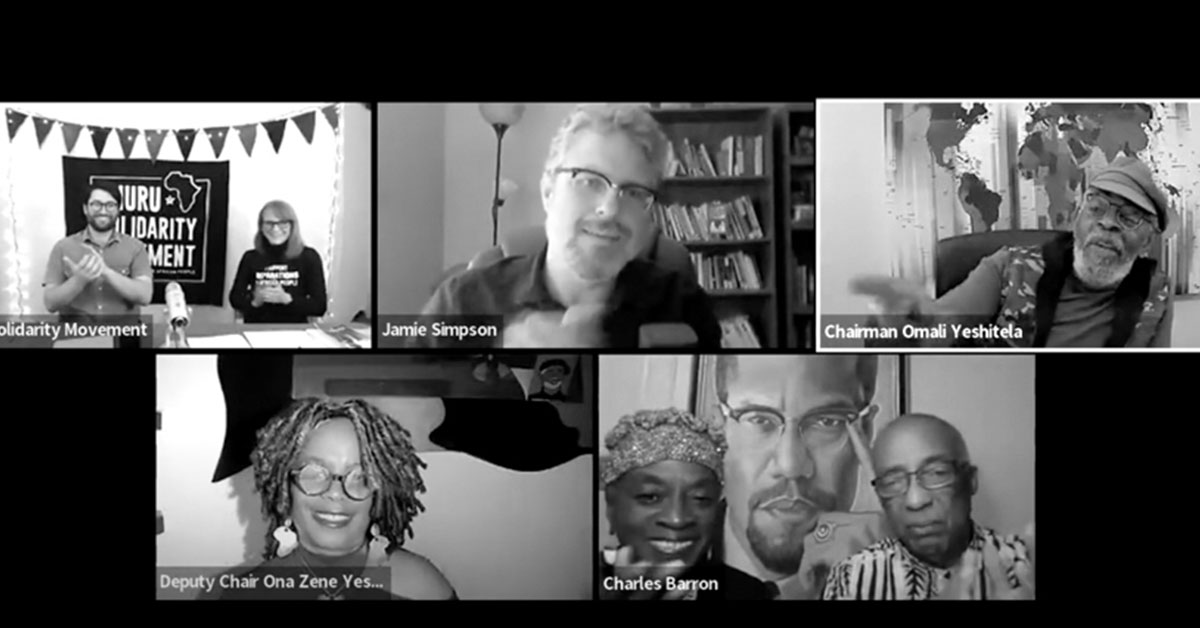 Beginning at 7am on November 30, 2021 and ending at 7am on December 1, 2021, the telethon was broadcast live from all around the world, including from the African People’s Solidarity Committee’s (APSC) new Solidarity Center at 2654 Gravois Avenue in St. Louis, a building owned by the African People’s Socialist Party (APSP) and a hallmark of Black Power, right in the middle of the white community.

The Telethon featured guest speakers from around the world:brilliant African culture workers, members of our leadership, the APSP, the APSC, the USM and captivating, historic videos.

It’s “Give Back Tuesday,” Penny Hess, Chairwoman of the APSC, called it, “because this is about paying reparations to the programs of the Black Power Blueprint.”

Under the leadership of the APSP and its founder, Chairman Omali Yeshitela, this year the Reparations Telethon had a goal to raise $40,000—the remaining funds needed for the $130,000 Community Basketball Court project—a key part of the African economic development and self-determination organization, the Black Power Blueprint, in north St. Louis.

The dynamic program of the 24-Hour Reparations Telethon took viewers on a journey through the history of African resistance through the eyes of the African working class based on the scientific theory of African Internationalism, developed by Chairman Omali Yeshitela.

African Internationalism recognizes that capitalism, born as a world economy, has its origin in the assault on Africa and the global trade of African human beings as well as the ensuing European onslaught on most of the world.

As Chairwoman Penny stated, “This country and this system are built on the assault on Africa…the kidnapping of African human beings which created this vast capitalist economy.”

The only way to overturn this system of white people living at the expense of Africans is to return the wealth and power that were stolen from them.

We must “turn over resources…to the African working class community that is working to build self-sufficiency and dual and contending power in their own hands,” Chairwoman Penny said.

“White people,” she continued, “have access to this stolen wealth, social and generational wealth, based on the fact that our lives sit on a pedestal of the oppression of African people.

Giving Tuesday, a national day of supporting nonprofits and charities, played an important role in reaching a new audience and new potential supporters this holiday season.

USM used this day as a way to win white people to go beyond charitable giving and to take a stand with real repair of the world by supporting reparations, the black working class and their struggle for economic development.

As explained by Reparations Legacy Project Grants Coordinator Leah Fifield, USM is not a charity. It is genuine white solidarity with African liberation and a way to extend the African revolution into the colonizer population.

“Charity is based on the premise that oppressed people are deficient in some capacity and that the charitable enterprise should decide what the community needs and how to provide it” stated Leah. This creates a top-down power dynamic that reinforces the economic inequities.

This is called colonialism: a foreign and alien domination of a people. “An assault on the productive forces of a people,” stated Chairman Omali during the main featured round table panel with the leader of the Black Power Blueprint, APSP Deputy Chair Ona Zené Yeshitela; Chairwoman Penny; Chair Jesse Nevel of USM and St. Petersburg Chair, Jamie Simpson.

“The Black Power Blueprint represents a struggle against colonialism. A struggle to liberate the productive forces of the people—the land, the people and what’s necessary to produce.”

The Chairman continued, “The Black Power Blueprint initiates a process of dual power [that creates] our own power of the colonized that’s designed to negate the power and influence of the colonizer.”

“We have to return what belongs to African people; that is not charity, that is stolen just as this land belongs to Indigenous people,” Chairwoman Penny added.

“We’re not here as advocates, supporters or allies,” she continued. “We’re here as a tool of the African Revolution.”

It will take more than fighting against racism and making donations to charities to change the long-term conditions of African people whose resources have been consistently extracted around the world for the last 600 years.

The panel was joined by NY Assemblyman Charles Barron and City Councilwoman Inez Barron who not only united with the call for Black Power and self-determination, especially from the wealthy bourgeoisie of the NBA, but also made a generous contribution of $5,000.

To bring the funds to an even $111,000, Deputy Chair Ona Zené and Chairman Omali Yeshitela contributed funds in honor of their son, Octavius Clark, who was a victim of Covid-19, or the colonial virus as the Chairman calls it, which disproportionately affects the African community.

The Uhuru Movement is a people’s movement

The Reparations Telethon both began and ended with USM Chair Jesse Nevel and APSC Chairwoman Penny Hess along with Jamie Simpson and Telethon Coordinator, Len Demmer.

Also featured were two one-hour-long segments of Uhuru Furniture and Collectibles (UFC), an economic institution of APSP, in both Philadelphia and Oakland, which were mini telethons thousands of dollars for the basketball court.

The inspiring segments of UFC showcased videos of customer, employee and volunteer interviews, the economic development work from the stores and the amazing progress of the Black Power Blueprint because of it.

Also featured was an interview with Unión del Barrio Under Secretary General Benjamín Prado and the genius talents and interviews with revolutionary singer and APSP Haiti expert Elikya Ngoma, APSP member and political rapper in Occupied Azania Asa Anpu, the brilliant drumming of Philadelphia’s own Karen Smith, the vigorous song “Vanguard” by Zondlile, and the powerful Reparations Song by Jackson Hollingsworth.

The telethon featured so many members and volunteers of USM and APSC and highlighted the amazing and influential reparations donors who are helping to build a culture of reparations internationally.

Visit YouTube.com/UhuruSolidarity to catch up on the three-part video of the telethon.

Register for the 2022 APSP Plenary!

Len Demmer is a member of the African People’s Solidarity Committee and contributor to The Burning Spear newspaper‘s “White Solidarity with Black Power” column.

Len Demmer is a member of the African People's Solidarity Committee and contributor to The Burning Spear newspaper's "White Solidarity with Black Power" column.