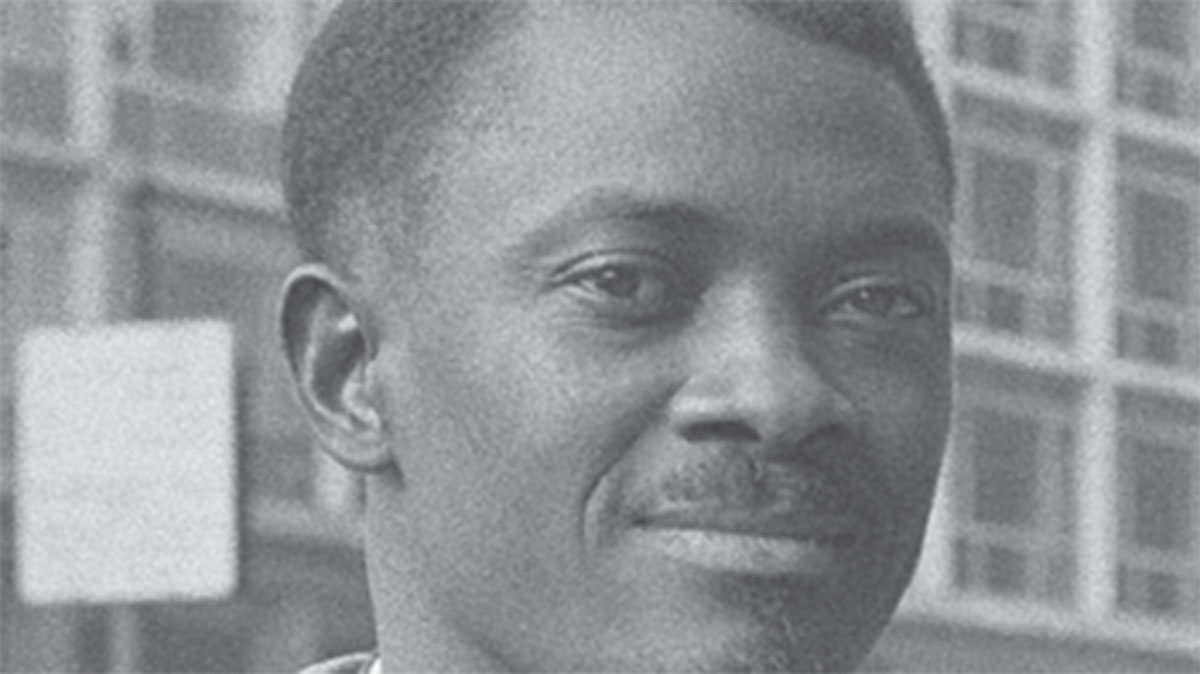 January 17, 2021 marks the sixtieth anniversary of the 1961 assassination of the Afrian patriot and martyr Patrice Lumumba by the U.S. CIA.

For white people, we must take responsibility for the fact that sixty years later, the effects of the brutal imperialist murder of Lumumba, carried out in our name, are still brutally experienced by African people in Congo and throughout Africa.

The first Prime Minister of independent Congo, Lumumba is a giant in the centuries-long struggle for liberation and self-determination for Africa and African people everywhere.

Lumumba was only 35 when he was slaughtered by the U.S. with the help of Belgium. The legacy of his courage, integrity and fight for a united Africa is upheld by freedom loving people throughout the world.

In the 1950s and 60s, revolution was the main trend in the world, as African People’s Socialist Party Chairman Omali Yeshitela often explains.

Anti-colonial ferver abounded from Vietnam and China in Asia, to Algeria, Kenya, Azania and Zimbabwe in Africa and the Black Power Movement inside the U.S.

The mid-twentieth century was a heady time when oppressed peoples around the world were throwing off the bonds of colonial domination and feeling the taste of independence and self-government.

In 1480, Portuguese ships first landed at the mouth of the Congo River and the assault on Central Africa began.

Despite fierce armed resistance from African people, Portugal was soon kidnapping 15,000 African people a year from what they called the Kingdom of Kongo.

African people began to flee the coast to escape the terror of white traffickers who turned African human beings into the most valuable cargo on the planet to be sold in the Americas.

By the 1700s, African people were being kidnapped by white terrorists and traffickers from as far as 700 miles inland.

This assault on Africa, the sale and enslavement of African people, the theft of African resources, labor and genius on land stolen from the Indigenous people in the Americas is what birthed the parasitic capitalist system and created the massive wealth that transformed Europe from feudalism to capitalism.

As Chairman Omali Yeshitela has taught us, for 600 years African people have been dominated by the extreme violence of European colonialism that forced African people to reproduce life for white people and not for themselves.

In 1884 and 1885, a conference was held in Berlin, Germany attended by all the imperialist powers of Europe with the sole purpose of dividing up Africa as colonies for the pleasure and wealth of the white world.

The natural wealth of Congo was so great that the infamous Berlin Conference was known in German as the Kongokonferenz—the Congo Conference.

Out of this gathering of murderers, thieves and colonizers, King Leopold of Belgium became the sole proprietor of part of Africa, called Congo. It was and is a vast swath of land nearly the size of India that sits right in the heart of the Continent.

What is now called the Democratic Republic of Congo (DRC) is the most minerally rich and dense land in the world. After 600 years of plundering, it’s as yet un-exploited wealth still in the ground is estimated to be worth at least $24 trillion dollars.

Congo also has limitless water from the world’s second-largest river of the same name. Congo lays in a benign climate with rich, fertile soil.

Abundant deposits of copper, gold, diamonds, cobalt, uranium, coltan and oil are just some of the minerals that should make Congo and all of Africa one of the world’s richest places.

King Leopold set up rubber plantations in Congo. When the people resisted and refused to harvest the crop for him, Leopold ordered their hands cut off. It was reported by eye-witnesses that there were literally “mountains of hands.”

Before there was even a word for genocide and a half a century before white people killed other white people in Germany, King Leopold slaughtered 15 million African people in Congo. There was no outcry and Europeans, including Jews, did not even blink an eye.

Until the fierce African-led anti-colonial rebellions in response to the police murder of George Floyd and defined by Chairman Omali Yeshitela this summer, statues of Leopold on horseback were found in the town squares of every Belgian city and town.

Antwerp had a monument that said, “Thank you King Leopold for giving us the Congo,” from the people of Belgium. African led uprisings have finally forced the removal of these monuments to genocide and plunder.

Patrice Lumumba rose up to lead the struggle for independence

Patrice Lumumba was born in 1925 in central Congo. An African patriot and believer in the total unification of Africa, Lumumba was a courageous leader in the struggle for Congo’s independence from Belgium and a brilliant speaker and organizer.

Lumumba was elected the first Prime Minister of independent Congo under the neocolonial president Joseph Kasa-Vubu. At the independence day ceremony on June 30, 1961 the then-King Boudouin gave a speech referring to Belgian’s brutal colonial domination of Congo as “a civilizing mission.”

While Kasa-Vubu accepted the Belgian King’s colonial arrogance, Lumumba responded with a brilliant and electrifying address broadcast on radios to the masses of Africans throughout the country.

Lumumba stated, “No Congolese will ever forget that independence was won in struggle, a persevering and inspired struggle carried on from day to day, a struggle, in which we were undaunted by privation or suffering and stinted neither strength nor blood.”

Lumumba reminded the king of the genocide and the suffering of ordinary Congolese people under colonialism, through forced labor, colonial discrimination, land seizure, wealth disparity and physical maltreatment at the hand of the colonial State.

Lumumba ended his speech with calls for Congo’s independence as a decisive step towards the “liberation of the whole African continent” and the exclamations, “Long live independence and African unity! Long live the independent and sovereign Congo!”

Many have said that Lumumba’s powerful speech in defense of the interests of the masses of African workers and peasants signed his death warrant with U.S. imperialism.

When Lumumba came to the U.S. in the summer of 1960 to address the United Nations, the CIA and the then U.S. Secretary of State under president Eisenhower met with him.

One of the issues surrounding Congo independence was the control of the mineral rich Katanga province and eastern Congo, which borders Uganda, Burundi, Tanzania and Rwanda.

This is where Congo’s massive mineral reserves are located – the diamonds, uranium, copper, gold, and coltan – which is now critical as a conductor for lithium batteries used in computers and cell phones.

During the period of the emergence of Patrice Lumumba, U.S. backed Moise Tshombe had taken over Katanga and declared it independent of Congo. Lumumba went to the UN to call on the U.S. backed body to support independent Congo in defeating the break-away Katanga province.

A New York Times article from 1981 reported that the U.S. secretary of state and CIA agents present had testified that Lumumba had struck them as an ”irrational, almost psychotic personality.” ”The impression that was left…was … very bad, that this was an individual whom it was impossible to deal with. And the feelings of the government as a result of this sharpened very considerably at that time.”

Because Lumumba was uncompromisingly on the side of the interests of the masses of the African working class and peasants, Lumumba was called “irrational and “psychotic” and U.S. plans to assassinate him moved forward.

After President Eisenhower approved the assassination of Lumumba that summer, Lumumba was removed from his position as prime minister in September 1960 and a U.S. backed coup was orchestrated installing Joseph Mobutu in power.

The Mobutu coup was backed by the U.S. government and the imperialist Katanga Mining corporation Ltd.

Lumumba went on the ground to mobilize the masses. In December, he was captured and tortured, starved and beaten daily.

On January 17, he was flown to Katanga. On the plane, he was beaten so brutally that the pilot warned it would crash the plane.

That night, Patrice Lumumba was taken out to the countryside and executed by firing squad by Belgian mercenaries. A few days later, the Belgian Police commissioner Gerard Soete exhumed Lumumba’s body, dismembered it and put it into vats of sulphuric acid. On TV, Soete showed two teeth in his possession that he said belonged to Patrice Lumumba.

Following the murder of Lumumba, Mobutu remained president for 32 years in a notoriously violent regime against the people. Mobutu was paid well by his imperialist masters, becoming one of the richest men in the world, having stolen billions of dollars from African workers.

In September 2020, it was ruled that Belgium must return Patrice Lumumba’s tooth to his family.

Today, a reported 80 percent of coltan and other precious minerals come from Eastern Congo. U.S. backed proxy armies coming into Congo from neocolonial regimes to the east have inflicted unspeakable violence over the past 20 years, murdering at least 10 million African people. They have used rape as a deadly weapon of war against women, men and children, as well as mutiliation and cutting off of hands and arms.

The Katanga Mining Company, which forces little children into slave labor in the perilous cobalt mines, still operates as a subsidiary under the Israeli-owned Glencore, the largest mining corporation in the world.

Last year, Apple, Dell, Google, Microsoft and Tesla were named in a lawsuit filed by children and parents in Congo for forcing children into slavery.

Today, 70 percent of the population of Congo lives on less than $2 a day in a part of Africa with the most valuable resources in the world.

There are no such things as blood-free diamonds, coltan and resources! Every mineral taken from the ground of what is called Congo is dripping in the blood and suffering of African people.

The colonization and all out theft of Africa’s resources continues unabated since the first Portuguese landed at the mouth of the Congo river and began stealing and selling African human beings.

Africa’s resources belong to African people, pure and simple. All African children should be able to grow up with every possible necessity for a prosperous and productive life as part of the African Nation.

This is why the African People’s Socialist Party is serious about the total liberation of Africa and African people everywhere and are seriously preparing to self-govern.

And this is why the Party has built the African People’s Solidarity Committee with the mandate to go “behind enemy lines” into the belly of the white colonizer nation to win reparations to African people. Not as a favor, but as the return of stolen resources to the African Revolution.