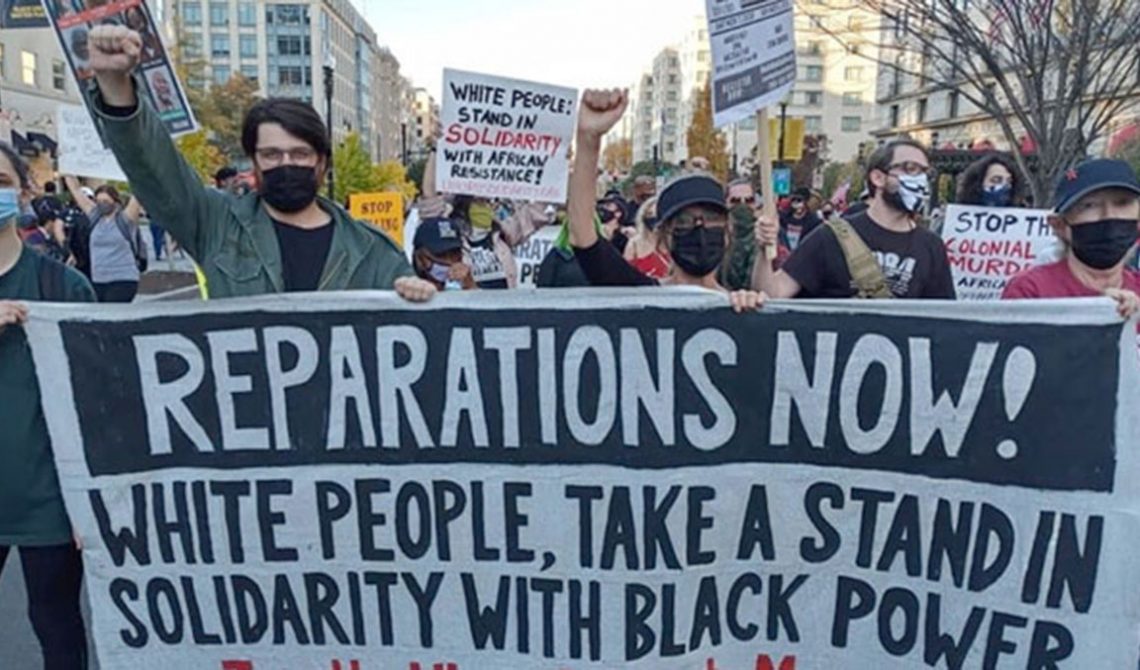 The Uhuru Solidarity Movement (USM) is excited to announce the Reparations Legacy Project: organizing white people with access to financial and social wealth to take a stand for reparations by redistributing resources towards the black-led social justice and economic development programs of the African People’s Socialist Party (APSP).

Following the heroic African uprisings after the murder of George Floyd, many banks, corporations and wealthy white people have publicly stated that they want to support the black community’s struggle and take a stand for reparations. The Reparations Legacy Project is how they can do it.

This is an open door for all white people with social wealth who want to be a part of real transformation under the leadership of the African working class.

USM is the organization of white people formed and led by the African People’s Socialist Party, extending the struggle for African Liberation into the white community. Reparations is a revolutionary demand that is and must be defined by the organized African working class itself, tied to the struggle for political and economic power in their own hands. It is not a call for charity or philanthropic “generosity,” nor is it something that can be defined by white people.

We organize actions to demand reparations from the one percent, the billionaires who hoard the resources stolen from African people, including the filthy profiteers of the COVID-19 pandemic that has ravaged the African and other oppressed communities.

Both the Reparations Legacy and the Make Wall Street Pay Reparations campaigns are raising funds for the Black Power Blueprint (blackpowerblueprint.org) in St. Louis, a community-building initiative transforming North St. Louis through economic development, renovation and political power by and for the black working class.

Reparations is a stand against colonialism, the social and economic system that perpetrates the domination of African people by white State power through violence for the benefit of the white colonizer population.

As Chairman Omali Yeshitela has shown, capitalism was born on the backs of African people through the assault on Africa, enslavement of African people and colonialism, as well as on the genocide and theft of land of the Indigenous people of the Americas. Such a parasitic social system cannot survive a successful struggle for reparations led by the African working class.

The African People’s Socialist Party is not a “single-issue” organization for whom reparations can be resolved through a one-time payment from the government or a bill passed by Congress.

Reparations, as Chairman Omali Yeshitela says, is a function of the African Revolution. For the Party, reparations is a tactical and strategic means towards a revolutionary end: total liberation and self-determination of African people in the U.S. and around the world.

The Reparations Legacy Project unites with the Party’s understanding that reparations will not be determined by the goodwill of the ruling elites but by the forcible redistribution of the world’s wealth back into the hands of its producers and rightful owners, the African working class and colonized workers of the world.

Reparations is our class struggle

For all white people regardless of our income or background, reparations is our true class struggle. We can rectify our parasitic relationship to the peoples of the world.

We can refuse to support our ruling class any longer. We can take a stand to say that we will never again fight their wars, vote for their policies or carry out their will.

As Chairman Omali Yeshitela has proven, the real class struggle in the world is the anti-colonial struggle, led by the African working class.

The primary struggle at the core of capitalism is not between white workers and bosses, but between the oppressor (white) nation—that’s us—and oppressed (African and Indigenous) nations.

While not all white people are the one percent, we all have access to social wealth and democratic rights on the pedestal of the oppression of African people.

That’s why the statistics and disparities are so stark. No reforms have ever changed this, and they never will.

The Reparations Legacy Project was created to repair the damage of a system in which African people have been exploited for hundreds of years, their labor, land and resources stolen from them by white power.

Unity through reparations: Join the rest of humanity

As Penny Hess, Chair of the African People’s Solidarity Committee, wrote in the book Overturning the Culture of Violence, reparations is a stand that “goes right to the dialectical relationship between human bondage and wealth, genocide and land ownership, suffering and well-being, justice and atonement.”

Join this campaign to target the one percent and raise millions of dollars in reparations to the African-led movement for the creation of an independent, anti-colonial, liberated black working class economy that empowers African people to gain control of their own resources so that charity and philanthropy become obsolete.

All of us in the white community who have access to social wealth can participate as a genuine stand of class struggle, unity and solidarity with the right of African people to be self-determining.

In 1982 Chairman Omali Yeshitela served as the People’s Advocate at the first International Tribunal on Reparations to Black People in the United States held in Brooklyn, New York, where he eloquently stated:

“To withhold the right to justice and international legality to the powerless, oppressed African people in the United States would be to validate the most cynical concept that ‘might makes right.’ It would give credence and validity to the awful concept of the right of the powerful to make and enforce international law. Such law as that is no law at all. It is accepted tyranny.”

Reparations to African people is our rejection of such tyranny and our refusal to be complicit with our own ruling class. Taking this stand is in our interests as human beings, whether we are business owners, CEOs or just regular white people who inherited wealth because of our place on the pedestal of the oppression of African people.

We can and must take an active role in ending the system of haves and have-nots built for our short-term material benefit on a foundation of the conquered lands, exploited labor and plundered resources of Africans and other colonized peoples.

Join the Reparations Legacy Project, a profound opportunity for white people to unite with the rest of humanity, right the historic wrong and align ourselves with a future where no human being profits at the expense of another.

Chair of the Uhuru Solidarity Movement