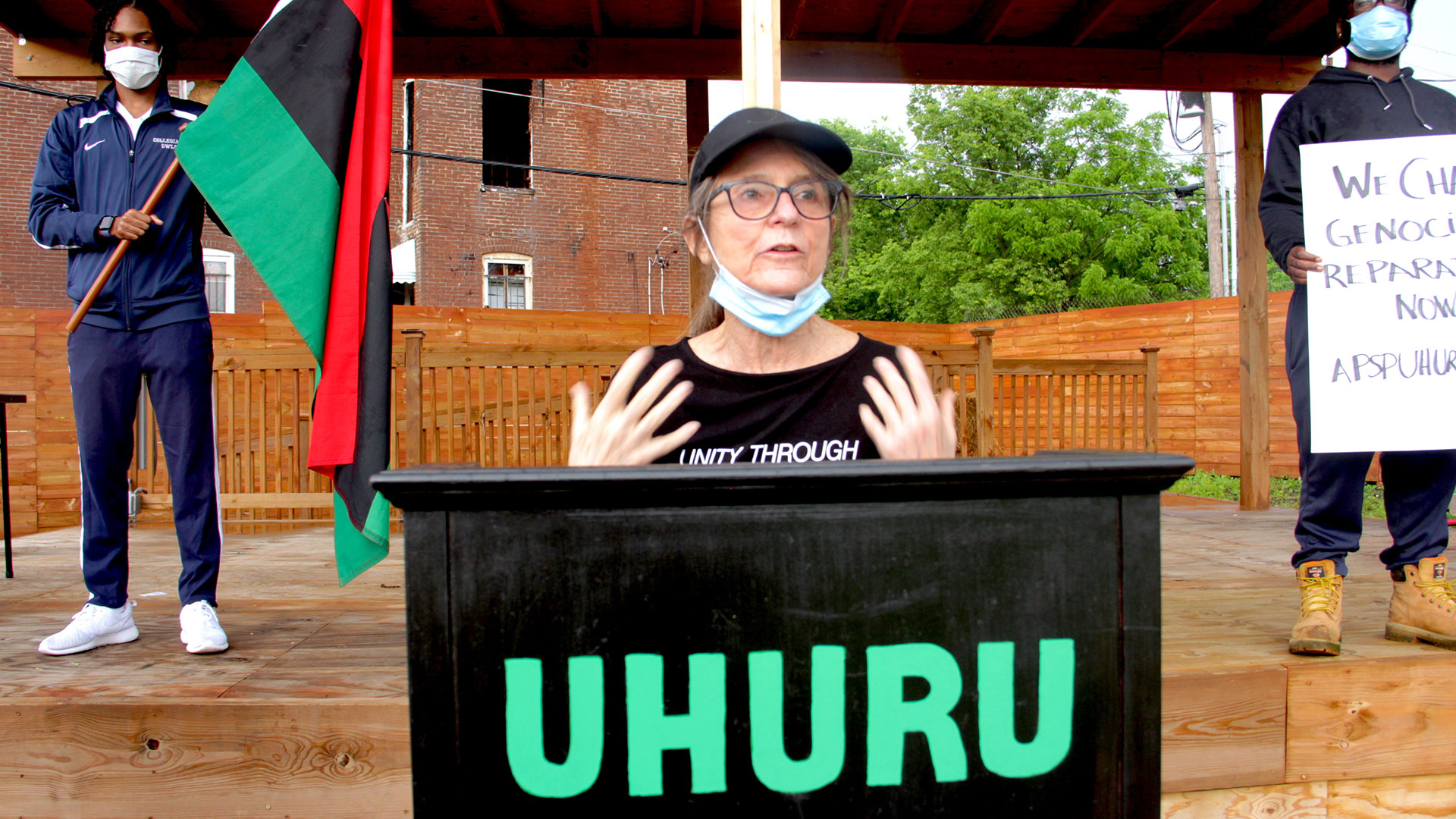 APSC Chairwoman Penny Hess gives APSC's statement at the African People's Socialist Party's press conference in St. Louis, MO, demanding justice for George Floyd, one of several held by the APSP around the country on Thursday, May 28, 2020.

(Photo: APSC Chairwoman Penny Hess gives APSC’s statement at the African People’s Socialist Party’s press conference in St. Louis, MO, demanding justice for George Floyd, one of several held by the APSP around the country on Thursday, May 28, 2020.)

The African People’s Solidarity Committee unites with the statement of the African People’s Socialist Party in denouncing the murder and lynching of George Floyd in Minneapolis by a white colonial cop who threw Floyd to the ground and dug his knee into his back until he couldn’t breathe, killing him with impunity in full view of witnesses recording on their phones.

We unconditionally unite with the right of African people to resist their brutal colonial oppression and support their demands put out by the African People’s Socialist Party for black community control of the police and the immediate withdrawal of the colonial police from the African community.

We stand in solidarity with the African community’s struggle led by the Uhuru Movement to build political and economic power in their own hands.

We unite that reparations are owed to African people and must be paid, based on 600 years of stolen labor and resources.

The APSC was formed on the understanding that this country and capitalism itself was born from the attack on Africa, the enslavement of African people, the genocide against the Indigenous people and colonialism inside the United States and around the world.

We understand that white people live our lives on the pedestal of the oppression of African people and that African and Indigenous people live under colonialism and face the violence of the colonial state inside the borders of the U.S.

We unite that this is a struggle that is much deeper than racism, the violent ideas inside the heads of white people. This is a struggle against colonialism and the force of the state that kills and oppresses African people in many forms every day.

We unite with the demands of the African People’s Socialist Party that the African community must be able to build political and economic power over their lives, for their own self-determination which is what the Party has done for nearly 50 years and is doing with the Black Power Blueprint and Black Star Industries today.

Join us in taking a stand for reparations to the African community and in solidarity with political and economic power in the hands of the African working class.

This murder took place during the COVID-19 pandemic in which up to 70 percent of the deaths have been African people in many cities.

This exposes the reality of the two Americas, one living at the expense of the other.

We cannot stand by. We cannot sit back. We cannot be complacent. We must take a stand that goes beyond protest. Take action. Stand in solidarity with African people. Expose our own white ruling class, the capitalist elites and Wall Street parasites whose hands are covered in the blood of African people.

JP Morgan Chase, the largest bank in the U.S., is also one of the largest donors to the New York police department who stop and frisk and murder Africans on a regular basis. And that’s just the tip of the iceberg.

They have blood on their hands. We have to make them pay.

Not in our name. If Africans had power over their lives and resources, George Floyd would be alive today. That is the world that we want to be a part of. That is the future that the Black Power Blueprint is creating.

Donate to the Black Power Blueprint at blackpowerblueprint.org

Stop the Attacks on the African People’s Socialist Party, Chairman Omali Yeshitela and the Uhuru Movement!