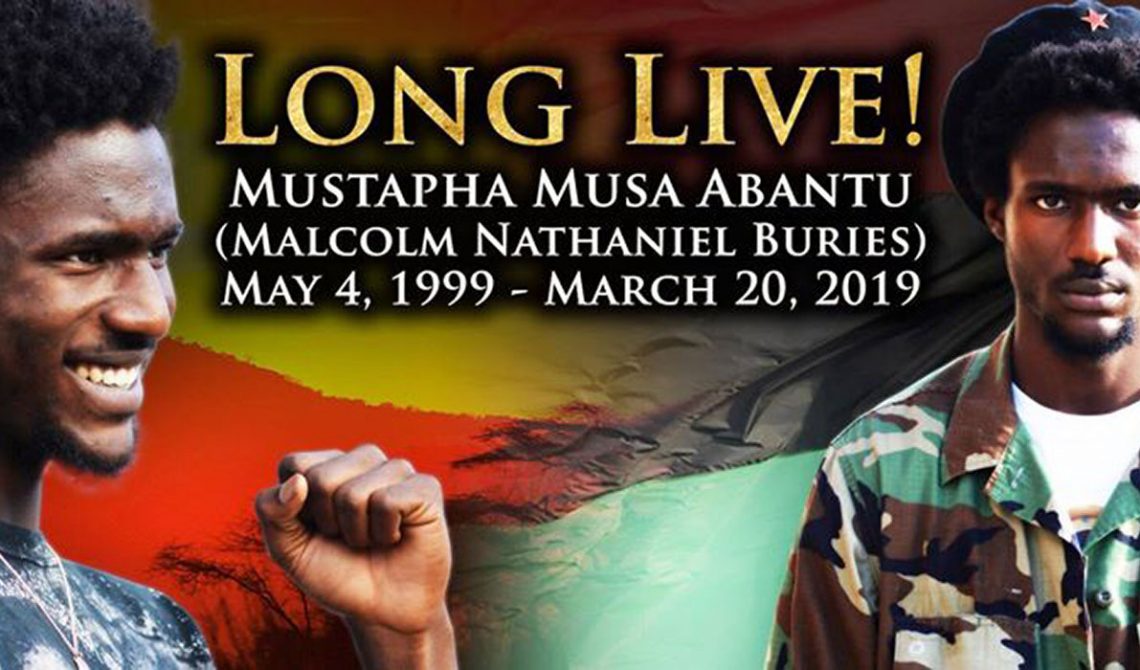 “We understand that no oppressed people has ever been free without the intervention of an organization of trained disciplined cadres who are committed to winning liberation by overcoming every obstacle, including our own limitations,” Chairman Omali Yeshitela, from the book VANGUARD: The Advanced Detachment of the African Revolution.

For African people, the struggle to be free and liberated; to crush imperialism and parasitic capitalism; to return Africa’s resources to the hands of African workers, cannot be victorious without iron-clad organization of the revolutionary Vanguard Party, accomplishing the impossible every day.

Collectively the African People’s Socialist Party is capable of overriding all limitations—even the deaths of our comrades and ourselves.

As individuals our deaths may be mourned by those who knew us and then forgotten by history.
For the revolutionary, the death of dear comrades motivates us to deepen our commitment to struggle.

Their heroic cadre stance in life; their unique contributions to the Revolution become a model for us, propelling us to fight harder every day and to give our very best and our lives to the revolution.

A revolutionary cadre never dies. She or he lives forever in the victory of the African Nation, the members of the Party and hearts of the people.

Ultimately, as Chairman Omali Yeshitela has taught us, the revolutionary anti-colonial struggle is a struggle for life, for African workers to control the means of production and reproduction of life and to end the death and violence imposed by imperialism.

The death of comrades becomes part of the life of the revolution.

This reality has been brought home so profoundly by the recent untimely death of Musa Abantu, a member of the African People’s Socialist Party.

Being only 19 years old, in his short time on Earth, Musa brought so much to the African Revolution.

Musa was the coordinator of the Party’s Honor Guard in St. Louis. He was the Outreach Coordinator for the Black Power Blueprint Steering Committee led by Deputy Chair Ona Zené Yeshitela and a member of the Uhuru Freedom Choir.

Musa will never be forgotten.

The powerful images of Musa as a young revolutionary, raising the 25 foot African flag, playing the drums, speaking at events, selling The Burning Spear are forever etched into the legacy of the Uhuru movement to be emulated by others.

As cadre under the leadership of the Party we confront our history of colonial violence, exploitation and suffering imposed on African people that paid our mortgages and tuition, paved our streets and uplifted us out of poverty and feudal serfdom at the price of untold suffering for colonized people.

Under the leadership of the Party, we build the movement of white reparations to African people.
We have the honor of being part of the inevitable future in which the African working class ushers in socialism and a new world without oppressors and the oppressed, colonizers and the colonized.

Many of the young solidarity comrades here in St. Louis knew Musa doing outreach and other work under his leadership.

Like everyone who knew him, they were deeply saddened and touched by Musa’s death.

For some of the solidarity comrades, this may be the first time that the fragility of life for colonized African people became a reality.

Musa’s death made it clear how the lives of the colonized hang in the balance every day, so different from the expectations of white people to live years into our well-funded retirements.
Musa’s death made the human face of colonialism a painful reality.

The bones of millions of Africans cover the floor of the Atlantic ocean, kidnapped human commodities, captives in the white man’s slave ships.

Millions of African people were whipped, shackled, raped and murdered to pick our cotton, plant our tobacco and cut our sugar cane until they died and built the economy which feeds us today.

At least ten million African people were murdered by King Leopold of Belgium in the Congo alone.

How many Africans were victims of Convict Leasing—men, women and children enslaved by the southern states with the motto, “one dies get another.”

Tens of thousands of African people were tortured and slaughtered by white working people in the public spectacles of violence called “lynchings,” or secretly on back streets, proving that all white people have the power of life and death over African people.

Thousands died in the uprisings of the Black Revolution of the 60s, from the four young girls murdered in the firebombing of the Birmingham church to the Watts Rebellion involving 34,000 people and a hundred deaths.

How many African people have been gunned down by police and locked up in prisons to die just in the last 25 years?

How many African children’s lives were cut short or destroyed as wards of the State in foster care?

How many babies and mothers died in the process of childbirth, or from curable diseases, or just the violent weight of colonial poverty and powerlessness?

On the wall at Akwaaba Hall at the Uhuru House in St. Petersburg, FL there are the photos of African people who were members of the of the African People’s Socialist Party or the Uhuru Movement over the years. These are heroic forces such as Biko Lumumba, Katura Carey, Lawrence Mann, Ifateyo Folashade, Anditu Soweto—all dead too soon, which is a result of colonialism.

Musa was indeed the human face of the African revolutionary, member of the African People’s Socialist Party, a young man, determined to overturn this colonial reality regardless of the price and to fight for the liberation of his people.

For those of us who are profoundly moved by Musa’s life we must turn our sorrow into action under the leadership of the Vanguard Party. We must carry out our mandate with the iron discipline of true cadre, winning white people to solidarity with the African Revolution.

We must raise massive reparations returning resources to the Vanguard Party, thrusting a knife into the machine of parasitic capitalism and forwarding the victory of a liberated Africa and African people everywhere.

Forward to the African Revolution!
Unity through Reparations!