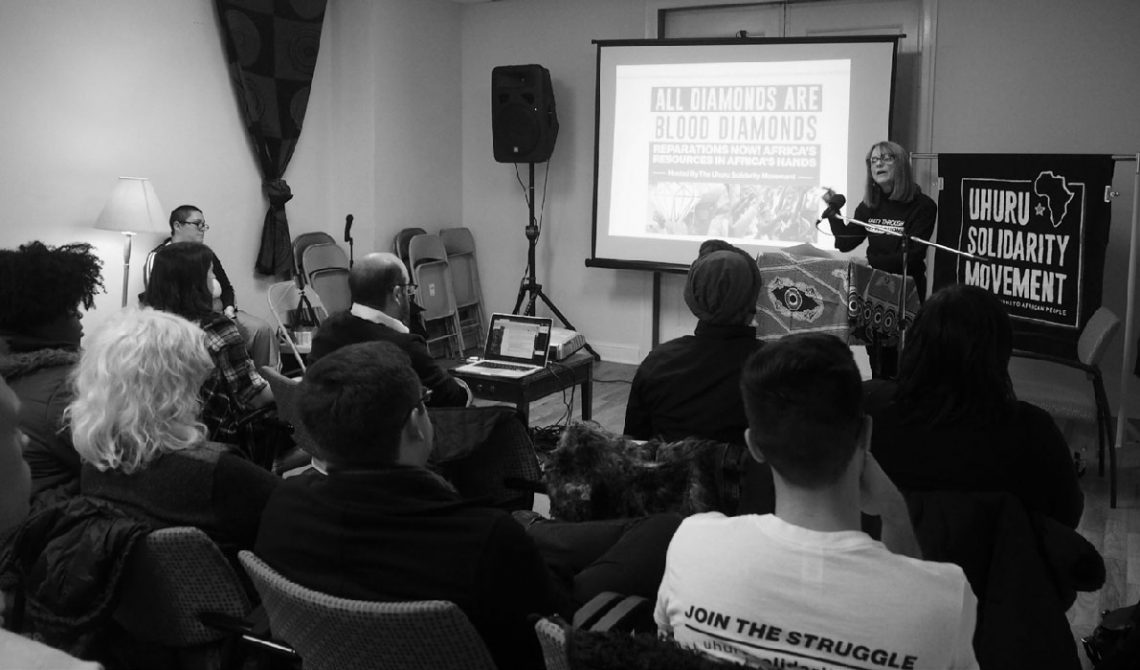 Originally published in the April 2019 issue of The Burning Spear newspaper and republished with permission.

The national speaking tour organized by the Uhuru Solidarity Movement, “All Diamonds are Blood Diamonds” kicked off last month in the Northeast with great success!

This 10-city speaking tour just visited Boston, NYC and Philadelphia in the last week of February 2019 and has been planned for months by the Uhuru Solidarity Movement, the mass organization of white people created by and accountable to the African People’s Socialist Party which organizes in the white community for reparations to African people.

USM is the mass organization of the African People’s Solidarity Committee, formed by Chairman Omali Yeshitela to extend the struggle for African liberation into the heart of the white oppressor nation!

The tour brought leaders of the African People’s Socialist Party and the African People’s Solidarity Committee to white communities across the region to speak about imperialist diamond trade, the colonial conditions that African people face, and a call to action for white people to return diamonds and other stolen resources. And we did get diamonds and other jewelry donated at these events! These diamonds are being returned to Black Star Industries, the liberated African economy, to become Certified Liberated Diamonds.

The keynote speaker for the three events in Boston, New York City and Philadelphia was Yejide Orunmila, President of the African National Women’s Organization (ANWO). This is the organization of the APSP that deals with the special oppression of African women.

The tour began in Boston, MA on 2/23 which brought people from New Hampshire, Rhode Island, New York and the Boston area to hear the message of African Internationalism!

The program was powerful and launched a new video produced by APSC, a very sobering view of the different realities faced by the colonizer and the colonized.

The second stop was New York City on Sun 2/24. Supporters traveled from across the region to attend the NY event, from DC to Philadelphia and Boston.

The evening began with a special Ribbon Cutting ceremony of the USM Solidarity Center, a partnership with local white artist and member of USM Theresa Byrnes who has opened her beautiful gallery space to the Uhuru Solidarity Movement as a place to hold meetings and events.

Chairwoman Penny Hess made a speech that this was a turning point for the organization to have a steady presence of white solidarity with Black Power in the heart of gentrified Brooklyn.

President Yejide’s presentation left no stone unturned and connected everything back to the colonization of African people. She spoke how for African women, “reproductive justice” is more than just in the womb– it’s about if African children can survive their childhood without the genocidal conditions of white power colonialism.

She spoke of how in parts of Africa there is no lighting not even on an airport runway. There was no lights anywhere for the people– except along the roads which lead to the diamond mines.
There were no paved streets anywhere for the African people– except the roads which led to the mines. This made the point of the tour all the more powerful that African resources MUST belong in the hands of African people!

The Philadelphia event 2/25 was the most packed with almost 50 people in attendance. The crowd was clearly in unity with the call to action to return stolen resources because the Philly event vastly exceeded its resource goal during the appeal!

Multiple diamond jewelry items were brought forward and returned to African people. Everyone was deeply moved by the program which was tremendously mobilizing.

In this era of the crisis of imperialism, the African working-class is leading the way for liberation and there are white people everywhere who want to be part of that liberated world!
Make America Pay Reparations!

The theme of the convention is “MAKE AMERICA PAY REPARATIONS!”, a retort to U.S. president Trump’s white nationalist slogan “Make America Great Again.” A country that was built on the enslavement of African people and genocide of Indigenous people can never be great and can never be reformed.

The system of parasitic capitalism must be and is being overturned by the revolutionary African People’s Socialist Party led by Chairman Omali Yeshitela.

Now with many presidential candidates including “reparations” on their campaign platform, it is urgent now more than ever that the Uhuru Solidarity Movement capture this zeitgeist.

We say that yes, America owes reparations! We also say that all white people everywhere owe reparations, because we sit on the pedestal of oppression and live at the expense of colonized peoples.

Reparations is our way forward as white people in overturning this parasitic relationship we have with the colonized peoples of the world.

Register for the USM National Convention at USM2019Convention.eventbrite.com.
UNITY THROUGH REPARATIONS! 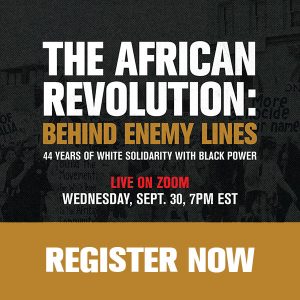